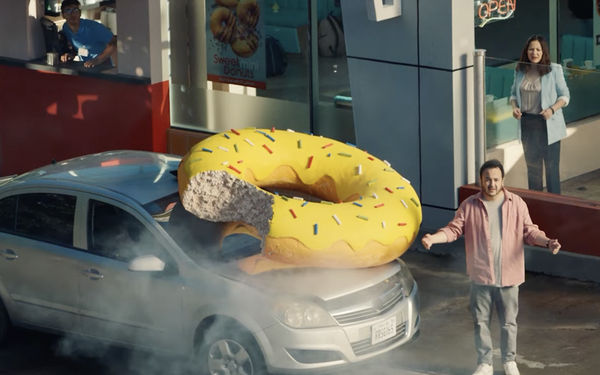 The “Antojo” campaign was inspired by the unjustified belief “They say when you drop your food, it’s because someone craved it.”

Edibles are dropped all over the place in Spanish- and English-language spots from the Gallegos United agency.

In this “Pizza Smoothie” video, it’s a Door-Dash-delivered slice of pizza, a cup of coffee, an ice cream cone, a humongous doughnut crashing onto a car, and a falling smoothie that’s caught in mid-air.

The campaign is rooted in the perspective that cravings are a common experience across cultures, but antojos are part of the way Latinos live life.

“Knowing that there are all sorts of antojos for moments paired with the breadth of experiences and businesses on DoorDash, it felt like a really nice fit for our brand,” DoorDash senior director of consumer marketing Katie Daire tells Marketing Daily.

Given that there are also antojos for fulfilling joys, “This is the latest of our work aimed at connecting with and empowering Latino communities.”

Examples include restaurateur grants and training through the DoorDash Main Street Strong Accelerator, and the company’s recently announced initiative with UnidosUS called Caminos, created for the company’s deliverers—known as Dashers.

According to DoorDash, Caminos will provide “local and virtual programming to U.S. Dashers who want to develop job skills, build a business or improve their financial well-being.”

DoorDash was the leading food delivery app last year, with 53% of the U.S. market—up from 16% in 2018, according to McKinsey & Company.

Losses from operations increased to $452 million from $436 million.