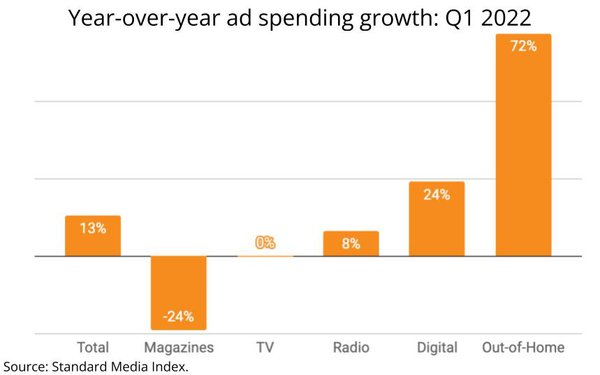 Overall ad spending surged 13% during the first three months of 2022, according to an analysis released this week by Standard Media Index, but the expansion was uneven across the major media.

All other media had healthy increases, especially digital (24%) and out-of-home (72%).

The out-of-home gains are especially noteworthy, given that the Out-of-Home Advertising Association of America just last week reported a 16% increase for calendar 2021.

Among the categories fueling out-of-home ad spending's growth are entertainment/media (+108%) and technology, which emerged as the two highest growth categories in the quarter.

While overall TV ad spending was flat during the quarter, broadcast spending rose 9% while cable fell 8%, according to SMI.