Poll Finds Only 47% Very Fine People On The Republican Side 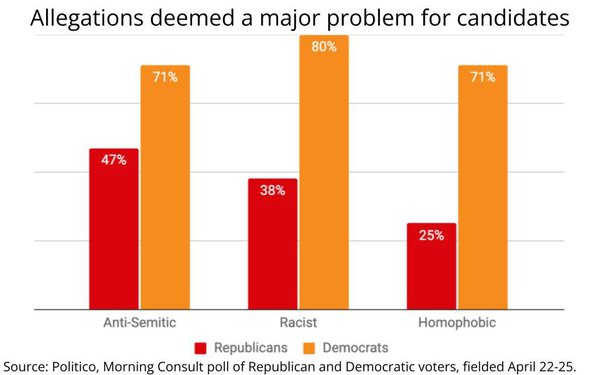 Apparently, there are very fine people on both sides. And when it comes to Republicans it's 47% of them.

At least that's the finding of a poll conducted by Politico and Morning Consult asking voters if they would have a problem voting for a candidate alleged to making anti-Semitic remarks.

Released on the eve of Holocaust Remembrance Day, the findings of the poll provide more evidence that when it comes to tolerating hate speech, the majority of Republicans are fine with that.

The poll found shockingly higher percentages of Republicans cool with racist and homophobic remarks (see above).

And while I'm almost as troubled by the fact that nearly a third of Democratic voters are okay with candidates making anti-Semitic remarks, at least they're in the minority, and my real concern is that Republicans may soon be in the majority -- at least in the House, and maybe the Senate -- following the midterm elections.

At least that's the current expectation of Ipsos political polling expert Chris Jackson, who provided an update to journalists and marketing executives of the research giant's current tracking today.

"We think there's about a one-in-ten chance that Democrats are able to hold onto things," Jackson handicapped, adding, "That might be a little optimistic for them, honestly."

The even money, by Jackson's count, is that Republicans will narrowly win control of the House, with slightly inferior odds giving them complete control over Congress.

While it's not unusual for opposition parties to gain seats in the midterms, we've never had one so vocally in opposition of hate as we do now.

Ironically, that's not one of the top factors that will determine the outcome of the midterms, says Jackson, because Americans of all parties -- including independents are mostly concerns with their pocketbooks. The economy in general and inflation in particular.

And on that basis, the party in control isn't polling especially well, despite the fact that the economy is actually very strong by most objective standards -- ie. employment and wages -- as well as the fact that inflation currently is a factor of external events such as supply chain and war-related energy issues. 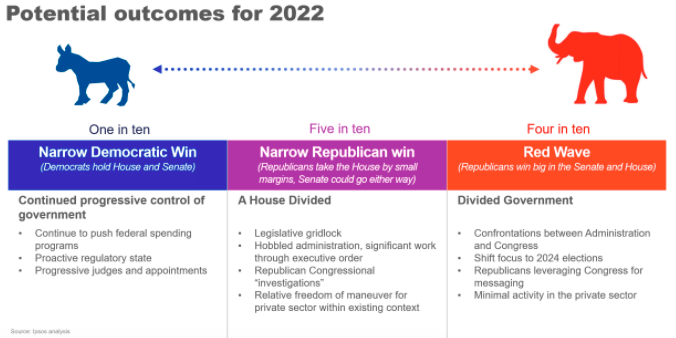 3 comments about "Poll Finds Only 47% Very Fine People On The Republican Side".
Check to receive email when comments are posted.
Read more comments >
Next story loading