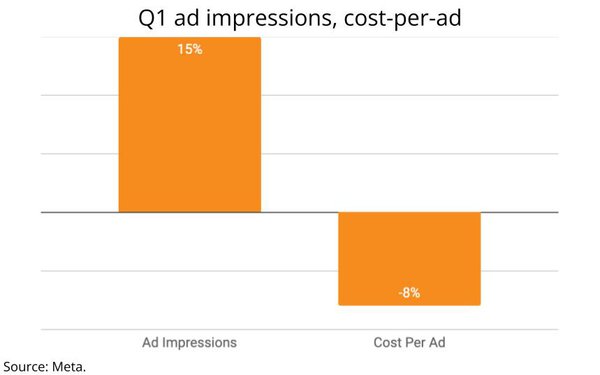 Meta reported a 7% increase in first quarter revenues, based largely on selling more advertising volume vs the same quarter a year ago.

In an earnings release distributed Wednesday afternoon, Meta, the parent of Facebook, Instagram and other apps and networks, said it increased its ad impressions volume 15% during the quarter, but the average price per ad sold fell 8%.

Revenue for the quarter totaled $27.9 billion, up from $26.2 billion in the same quarter a year ago.

"We made progress this quarter across a number of key company priorities and we remain confident in the long-term opportunities and growth that our product roadmap will unlock," Founder-CEO Mark Zuckerberg said in a statement released before an earnings call with investors and journalists set for 5 pm (EDT).

"More people use our services today than ever before, and I'm proud of how our products are serving people around the world."

The company also reported $5.55 billion in capital expenditures for the quarter, citing "principal payments on finance leases," but it's also been investing heavily on the build out of its metaverse infrastructure.