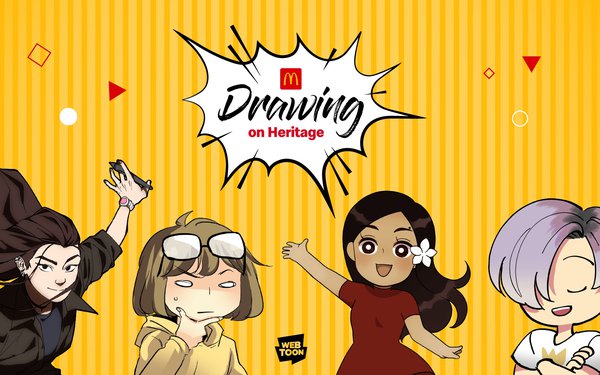 McDonald’s is making its first foray into the online comics space in an activation with the Webtoon platform, which will highlight artists of Asian background during Asian Pacific Heritage Month.

A four-part series titled “Drawing on Heritage” is Webtoon’s first partnership with a major QSR brand.

It began on May 1 with an illustrated story from comic artist Kaitlyn Narvaza—known on the internet as instantmiso—who relates how her love for such foods as guavas, calamansi, cheriumoyas and dragon fruit started with her Filipina grandma.

Toward the end of the “Meals and Memories with Grandma” narrative, Narvaza's grandmother calls and says she thinks instantmiso needs some Chicken McNuggets.

“Oh, this is grandma’s cute way of telling me she wants McDonald’s,” writes instantmiso, whose Webtoons series include “Eaternal Nocturnal” and “Siren’s Lament.”

The story concludes with instantmiso picking up a McDonald’s order and sharing it with Grandma.

Asian Pacific American Heritage Month is observed in May to recognize the impact of Asian and Pacific Islander Americans on U.S. history, culture and achievements of the United States.

“We know many of our fans are passionate about anime, manga and webtoons and it’s been exciting to see the brand show up in different anime works and digital comics,” McDonald’s senior director of cultural engagement Elizabeth Campbell tells Marketing Daily. “Partnering with the powerhouse that is Webtoon has been a great way to honor and celebrate this community through spotlighting these four APA artists and their very relatable personal experiences.”

The other three artists involved in the campaign are uru-chan—creator of “unordinary” on Webtoons—Kris Nguyen (“Cape of Spirits”) and Quimchee (“I Love Yoo”).

“We’re always excited to celebrate Asian Pacific American Heritage Month, knowing what it means to the APA community and our owner/operators and employees,” says Campbell.

And at the end of APA Heritage month, McDonald’s will commemorate historic APA figures through art works to be featured at the 626 Night Market in San Francisco, which runs from May 27-29.