It’s a volatile time to be in the real estate segment. After three years of price inflation, the Federal Reserve has raised interest rates, potentially cooling off the market.

The history of Opendoor’s marketing team is a little complicated. David Corns was executive vice president/managing director at R/GA but became vice president of marketing at Opendoor in January 2022. R/GA now shares the account with Venables Bell and Partners, which does the TV campaign for Opendoor. R/GA got on the account in mid-February.

One of Opendoor’s most notable efforts since Corns has joined has been a hack of the Multiple Listing Services listings. As anyone who has looked for a house recently knows, when you search an area you’re interested in, you get pictures of the properties. OpenDoor’s hack was to add computer-generated images of balloons and confetti (of purple and orange—the team colors for the Phoenix Suns)  to the images of bare kitchens and pools in the Phoenix listings. 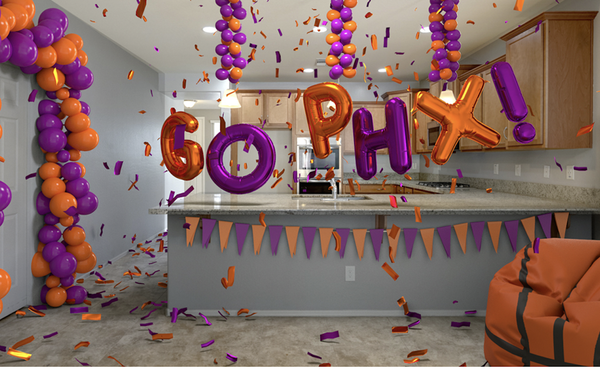 Corns said that that hack was really about “how do we take what is a highly traditional category, and find ways with R/GA to truly innovate within it?”

Though Opendoor is headquartered in San Francisco, the company’s founder, Eric Wu, is from Phoenix, so he has an affiliation for the area and its sports teams.

The hack is a way for Opendoor to stand out from its competitors on MLS, like Redfin and Zillow.

Opendoor also does traditional advertising, including a new campaign that broke last week. An inaugural ad shows a man reading the result of a pregnancy test and then quickly realizing his family is going to need more space.

The ad makes a proposition to people in that situation: Skip the hassles and sell directly to Opendoor.

Opendoor has a unique model in real estate: It owns homes all over the country.

Corns said Opendoor took inspiration from other companies, including Carvana and Airbnb.