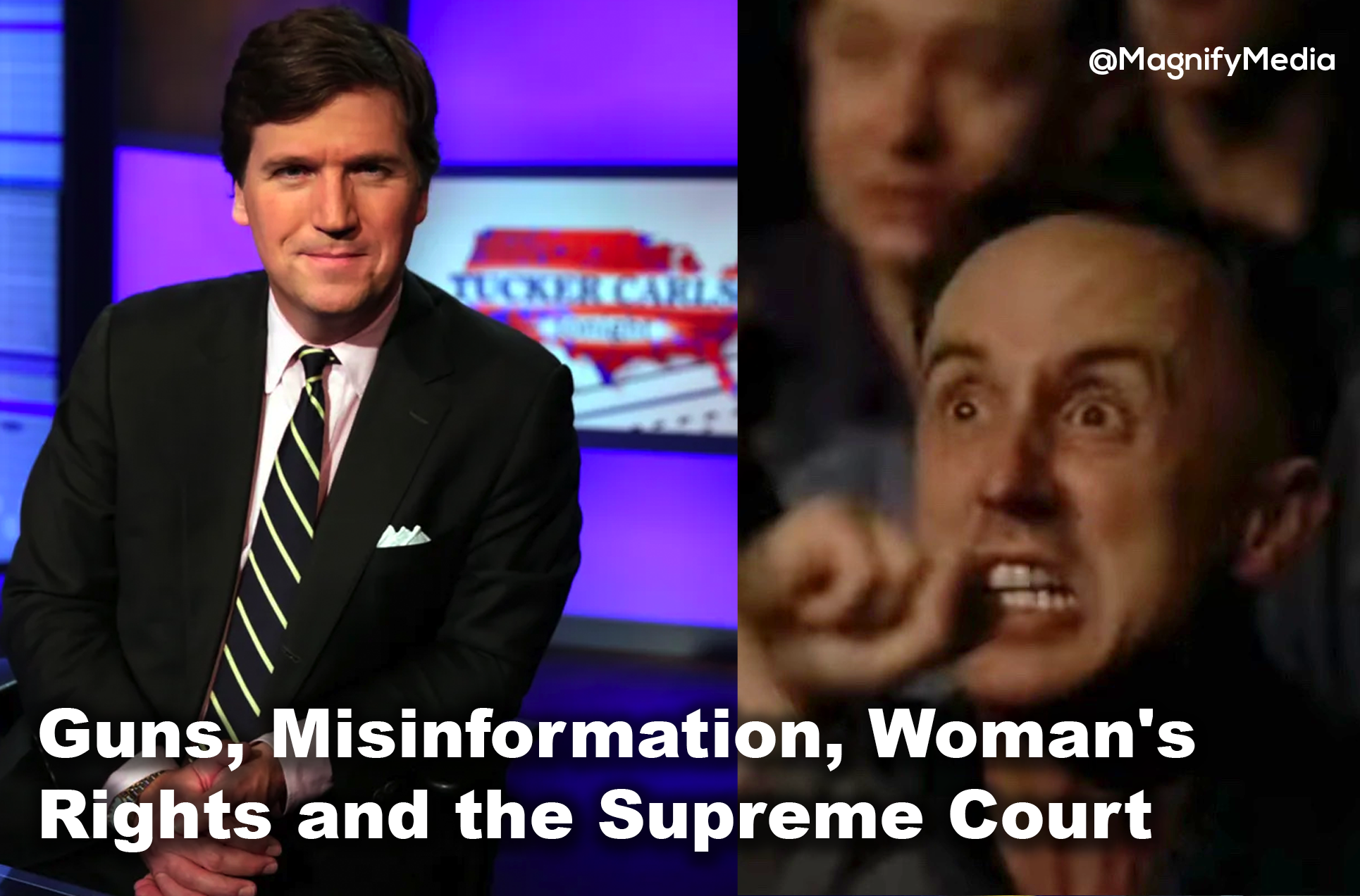 This story begins in Buffalo, but it doesn’t end there. This week an attack on a supermarket killed 10 people, most of them Black. The attack surprised no one. It isn’t the first, and it won’t be the last.

We’re 19 weeks into the year and America has already seen 198 mass shootings. We’ll skip the blah blah about why this could have happened, or how the shooter could have been radicalized. We know the answer. Rupert Murdoch loaded the AR15, and Tucker Carlson pulled the trigger.

That might seem a bit extreme, but let’s got to the videotape.

The New York Times recently reported that Carlson has long pushed the false conspiracy theory of the Replacement Theory: that Democrats were bringing “more obedient voters from the third world” in order to get more votes for their side. In previous years, immigrants from Irish, Jewish, German, or Polish heritage would have fit the Carlson thesis, but we simply know them as our grandparents.

Now, to be fair, Carlson didn’t make this up. And neither did Rupert or Lachlan. They are working from the playbook written by George Orwell. Orwell in his prescient, if not slightly mistimed novel “1984,” had a mechanism for how to organize and activate an audience of persuadable citizens. He called it two minutes of hate.

But in the next few weeks, the issues of guns, internet misinformation, and woman’s reproductive rights will all land with a powerful and undeniable thump on America’s front pages. The decisions have been made, the die is cast, and the unraveling of our democracy -- after years of careful planning -- will be laid bare.

As evidence of  right-wing radicalization, let me explain a Texas law that is almost certain to become the next chapter in the information war in America.

The law was quickly blocked by a Federal judge, and until yesterday it was off the table. But now it’s back on, and it’s going to the Supreme Court to block it or protect it. Having already seen the potential dismantling of  Roe v. Wade, and (we assume) the return to concealed carrying of weapons back in NYC, can we expect a more moderate approach to moderating hate speech and misinformation on the Web?

In the fall of 2021, Texas lawmakers passed HB 20, a law reportedly aimed at removing bias in internet platforms. HB 20 targeted platforms with 50 million or more U.S. monthly users to "block, ban, remove, deplatform, demonetize, de-boost, restrict, deny equal access or visibility to, or otherwise discriminate against expression." Simply put, platforms are now unable to review, or moderate content. The ruling that reinstated HB 20 sets the stage for a Supreme Court showdown over First Amendment rights and, possibly, a dramatic change in those rights.

Lawmakers said that the legislation was necessary to prevent “West Coast oligarchs” from silencing “conservative viewpoints and ideas.” The law applies to Twitter, YouTube, and Meta, as they have 50 million or more users, and operate in Texas.  If a platform removes a user’s content, it must provide them with notice and an opportunity to appeal. Alleged victims of “viewpoint discrimination” can also file suit against social media companies, as can the Texas attorney general.

And HB. 20 goes further. It bars social media companies from labeling posts on their own websites with warnings if a post contains violence, vulgarity, or disinformation. And one provision restricts email service providers’ ability to block spam, allowing users to collect $25,000 for each day that their provider impedes “the transmission of an unsolicited or commercial electronic mail message.” Huh?

It does sound a lot like Elon Musk’s limber libertarian “free speech” POV, in which nothing should be moderated, limited, or restricted.

So, with H. 20 now in force, and with the next stop at the Supreme Court, what is going to happen?  First of all, the major platforms can’t have a Texas-only moderation provision. So, the Texas ruling will impact all users.  Facebook could not block Russian bots against Ukraine. YouTube will not be able to remove videos by neo-Nazis. Twitter will not be able to take down ISIS videos.

So, hate speech, gun control and woman’s rights are all in the hands of the Supreme Court.&