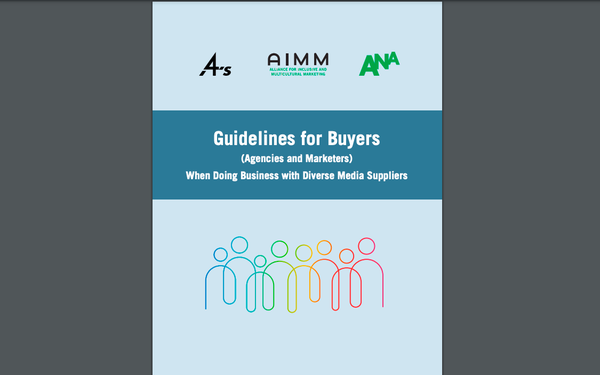 The Association of National Advertisers (ANA) and the American Association of Advertising Agencies (4A's) this morning released a new set of media-buying guidelines to "strengthen" the diversity, equity and inclusion (DEI) of brand marketers.

The recommendations, including 20 explicit guidelines, which can be downloaded via "Guidelines For Buyers (Agencies and Marketers) When Doing Business With Diverse Media Suppliers," were created by the ANA, the ANA's Alliance for Inclusive & Multicultural Marketing (AIMM) and the 4A's. They include:

The ad trade associations said there ultimately will be two "complementary sets of guidelines," one for advertisers and agencies and another for diverse media suppliers that will be issued later this year.