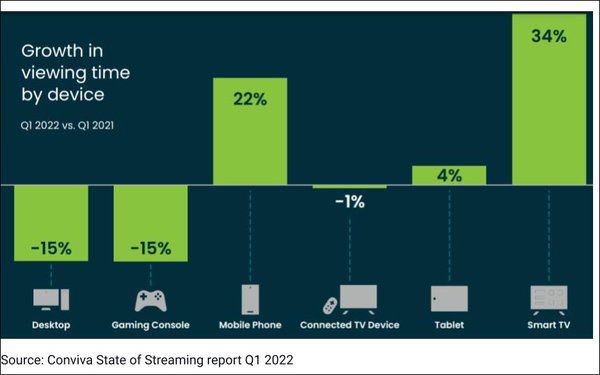 Streaming viewing time grew 10% globally on average in this year’s first quarter compared to Q1 2021, according to the latest State of Streaming report from streaming analytics platform Conviva.

Growth in mature markets continues to stabilize, with Europe up 9% and North America 5%.

Ad impressions were up 18% and ad attempts were up 14%, thanks in part to big, live sporting events like the Super Bowl, March Madness and the Winter Olympics.

Smart TV viewing time grew 34%, and connected TV devices were down slightly (-1%) for a second quarter. Within CTVs, Roku maintained its dominant share of viewing time, at 31%, and Amazon was again second, at 16%.

In terms of actual minutes streamed, Android TV saw by far the largest growth among big screens: up 78%.  LG, Samsung and Vizio smart TVs all also had double-digit growth, up about 20%.

Streaming on social platforms continues to become more popular among sports league fans, and TikTok was the only platform to grow its streaming audience share for every sports league measured by Conviva.

Bundesliga, Serie A, and the Premier League had the greatest increases in audience shares for streaming videos on TikTok: up 6% each.

In terms of the overall quality of the streaming experience, globally, bitrate/picture quality, buffering and video start failures all improved significantly (up 17.3%, down nearly 1%, and down 17.6%, respectively).

However, video start times increased in every region and were up 30% globally, on average. Smart TVs were the only devices to increase video start failures year over year, but still had a low rate (0.7%).

Connected TVs’ minutes were down 4% over this time last year, but still had the highest total minutes per play this quarter (nearly 28 minutes).