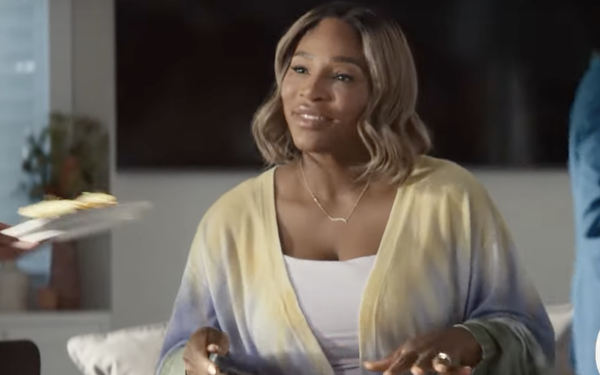 Serena Williams stars in a new campaign from Just Egg, which shows the tennis star merely eating breakfast and talking on the phone (in French) while J.B. Smoove narrates.

In the ad, via Mythology, Smoove provides a play-by-play description of Serena’s morning routine. “Y’all think the GOAT eats regular eggs?” asks Smoove. “Nope! Her eggs are made from plants, because she has nutritionists, scientists, trainers and, uh whatever this guy does…” (The ad shows a guy in a lab coat with a beard and glasses.)

Smoove goes on to say that Serena speaks French -- and we watch as she does just that. “Plant-based eggs for Madame Le GOAT,” Smoove concludes.

Another ad for Just Egg includes actor Jake Gyllenhaal, who, Smoove tells us, has just goten back from a workout and is now refueling with Just Eggs. At the end of the ad, Gyllenhaal appears ready to join some people outside the window, who are there to help him with “galactic global fight training.” Smoove adds that “those sexiest awards don’t win themselves, baby.”

The ads come as another celebrity, Kim Kardashian, just became chief taste consultant for Beyond Meat, another vegan brand.