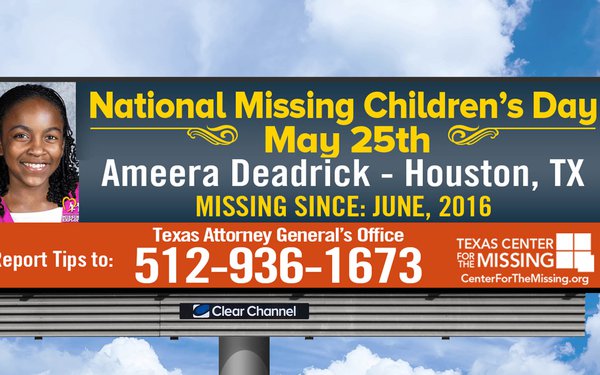 This is another story about Texas and children, but likely a more hopeful one than others you’ve been reading.

A day after 19 children were killed in a Texas elementary school, digital billboards went up calling out missing children in a state where the whereabouts of 253 kids are currently unknown.

Far from an exploitative move, the start of the month-long campaign coincided with National Missing Children’s Day, May 25. It marks the continuation of a multiyear pro bono effort that has succeeded in reuniting a number of children with their families, including four last year alone, according to Lee Vela, vice president, public affairs, Clear Channel Outdoor-Houston.

While most missing children are found quickly, some -- like those 253 in Texas and a current 388 in California -- remain missing for months and even years.

The Texas campaign -- a joint effort of Clear Channel, the National Center for Missing and Exploited Children and Houston’s Amber Alert Provider -- uses five separate billboards, each focusing on a specific missing child: two from San Antonio, and one each from Houston, Dallas, and El Paso.

Each billboard includes the child's name, photo, the date he or she went missing, and a local phone number to call with tips. If the child has been missing for an extended period, age-progression images are used. The campaign will result in thousands of daily impressions for each billboard, Clear Channel said.

A simultaneous nationwide campaign, running in such markets as Chicago, Los Angeles and New York, features billboards stating the number of missing children in each state, the message “Help Find Them,” and the URL, MissingKids.org.

All told, Clear Channnel is running the campaign in all of its markets with digital displays, covering 28 DMAs in 16 states.

For 15 years, Clear Channel Outdoor has also used the real-time capabilities of its digital out-of-home network to post amber alerts about abducted children