Fou Me Twice, Shame On Me 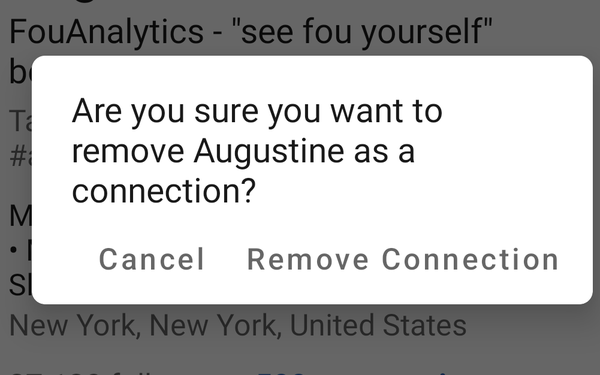 Over the years, I’ve blocked my share of followers on social media, but it’s mainly been on Twitter, where toxic exchanges aren’t exactly uncommon. But never on LinkedIn, until this week when I blocked a connection on LinkedIn, because of the toxic nature of his posts. It got me thinking about the nature of decorum on various platforms and apps and what our relative tolerance for abusive people is on them.

Oddly, I never blocked this same follower on Twitter, even though he spewed equally hateful attacks on that platform. Probably, it's because we’ve come to expect that sort of thing on Twitter. It’s, you know, de rigueur there.

But LinkedIn is supposed to be a place for dignified professional networking, sharing ideas and elevating content.

As a journalist, I’m used to taking hits from thin-skinned sources who don’t understand what we do, what news values are, and why we cover things the way we do. Or just have their own personal axe to grind.

I prefer they make those comments directly on our coverage so we can respond to them contextually and contemporaneously, but that’s not the way our multivariate world of media exchange works.

So it got me thinking about what and where else people are bashing my coverage. I’m dark on Facebook, and have been for many years now. These days, I only dip my toes into Twitter on an occasional basis, and usually when it involves something tweeted by a high profile industry exec. Or Elon Musk.

I don’t personally publish much content on any social platform – including LinkedIn – because I believe I already have the best and most contextually targeted publishing platform in the world on MediaPost.

I publish a personal blog on Substack for anyone interested in my alternative musings.

And I’m on various listservs, but usually just lurk to see what interesting things other informed people have to say. Occasionally, I see some of the same douchebags on them too.

I suppose I should be dabbling in more social media, if only to experience it so I can report on it better, but there are so many variations, and I find most of them to be time-sucks and rabbit holes.

So anyone who wants to kvetch about anything we publish – or about me personally – feel free to do it publicly on our pages at MediaPost (that’s what we’re here for). Or just reach out to me directly at joe@mediapost.com.

13 comments about "Fou Me Twice, Shame On Me".
Check to receive email when comments are posted.
Read more comments >
Next story loading