'Cancel Culture:' Dems Are From Accountability, Reps Are From Punishment 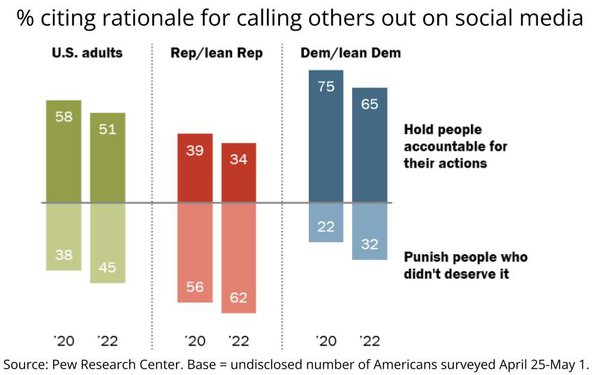 Americans overall have grown much more cognizant of the concept of "cancel culture," but when it comes to rationalizing the behavior of calling others out on social media, they appear to be politically divided: Democrats see it as a means of holding people accountable; while Republicans are more likely to see it as way of punishing people who don't deserve it.

These are among the findings of an analysis released Thursday by the Pew Research Center.

Overall, the study which is based on a survey of an undisclosed number of Americans conducted April 25 to May 1, found that many more Americans are aware of the concept: 61% vs. only 44% surveyed in 2020.

"Cancel culture is a highly politicized topic," Pew's Emily Vogel writes in an analysis published on the center's site Thursday, noting that while  Republicans and Democrats are equally likely to have heard about it, they disagree on the role it plays.

"Views on this question continue to differ widely by partisan affiliation," she explains. "Democrats are far more likely than Republicans to say that, in general, calling people out on social media for posting offensive content holds them accountable (65% vs. 34%).

"Conversely, 62% of Republicans – but only 32% of Democrats – believe this type of action generally punishes people who didn’t deserve it. However, the share of Democrats who see this behavior as punishment has risen 10 points since 2020. There has also been a 6-point increase in the share of Republicans who see calling out others on social media as unjustly punishing people."

The analysis also concludes that among Republicans, conservatives are more likely than moderate or liberal Republicans to see calling out others for sharing potentially offensive content on social media as generally punishing people who didn’t deserve it (65% vs. 57%).