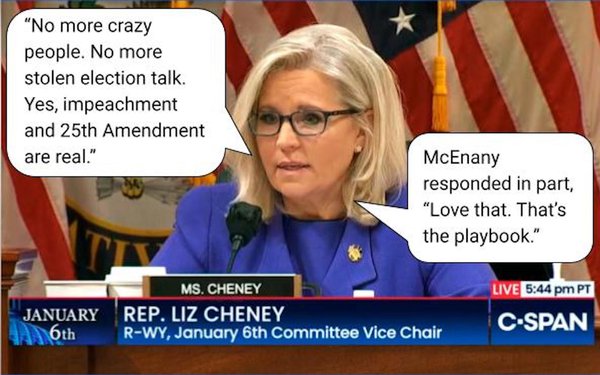 Pundits can debate the merits of Fox News Channel’s decision not to broadcast the January 6th Committee hearings, but based on last night’s opening testimony, it already is part of it.

“Most emblematic of those days is this exchange of texts between Sean Hannity and former President Trump’s Press Secretary Kayleigh McEnany,” House Select Committee Vice Chair Liz Cheney said, making the case during her opening remarks that at least one of Fox News’ prime-time stars – it’s No. 2 prime-time personality Sean Hannity – was working with the White House on its media strategy.

“Ms. McEnany responded in part, ‘Love that. That’s the playbook.’,” Cheney continued, giving Hannity about as much screen time as Fox News did during its upfront presentation to advertisers a few weeks ago.

The evidence sparked a tweetstorm outing Fox News, as well as its advertisers.

“I guess we know why Fox News was afraid to broadcast the January 6th Committee hearings,” Rep. Eric Swalwell tweeted.

“Now do you understand why Fox News doesn’t want to air the hearings,” @DashDobrofksy added in a tweet.

“If Fox News was any other company, Sean Hannity would be fired for cause TONIGHT for being directly involved as a participant in the January 6 coup,” @TristanSnell asserted in his tweet, adding, “Any company that still advertises with Fox News is funding the overthrow of the American government.”

This led to threads of tweets once again calling for boycotts of Fox News Channel advertisers, with at least one tweeter, @rise_alien, asserting that any brands advertising on Fox News have effectively “supported an insurrection.”

She then went on to post a string of tweets listing brands advertising on Fox News Channel.

While I don’t believe any of this should be surprising – or that it will move many American voters or advertisers to change what they support or don’t support – the Hannity/McEnany text exchange is empirical evidence that at least one of the news network’s most visible prime-time stars was advising the White House on the former President’s role in the insurrection.

I’m going to guess this is not the last time Fox News, or one of its personalities makes an appearance at the hearings that the network won’t even show to its viewers. 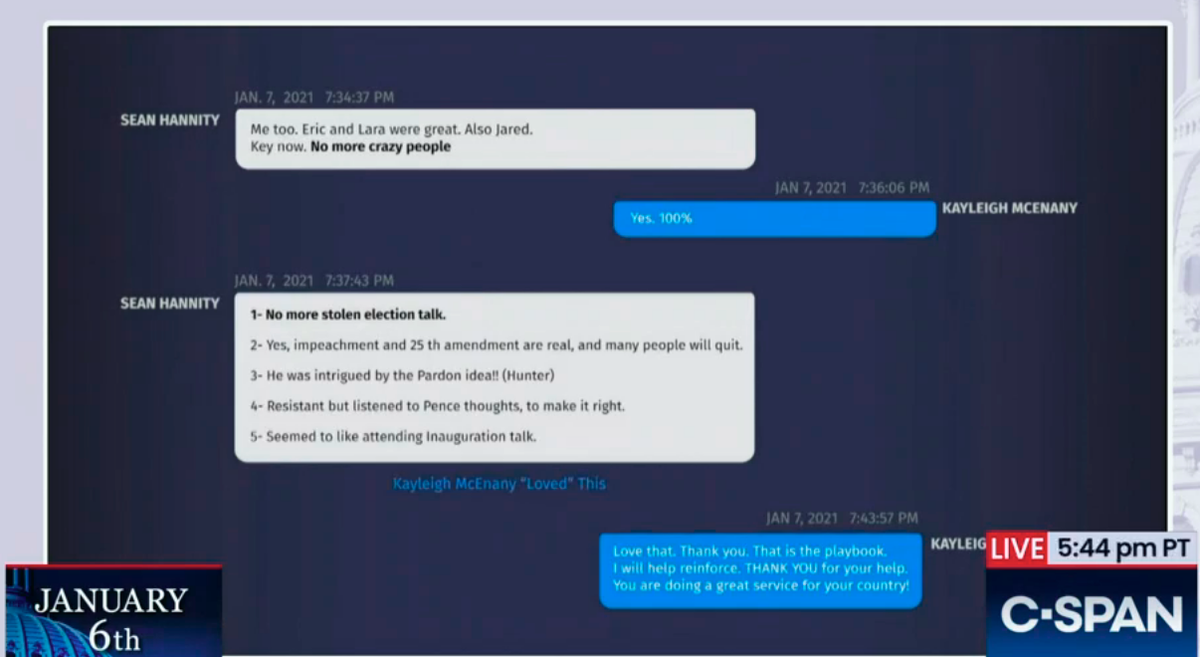