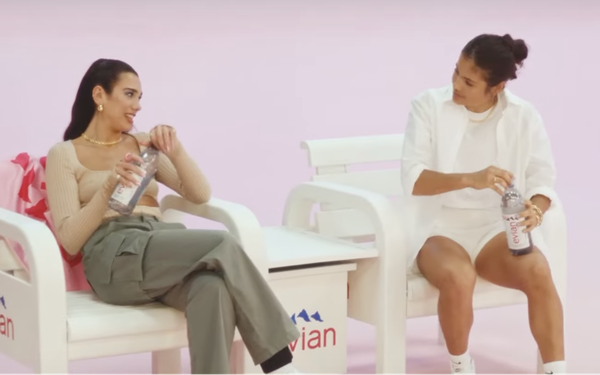 “You’re definitely a much better dancer than I’m a tennis player,” Dua Lipa surmises after comparing moves with Emma Raducanu in a new ad for Evian.

In the ad, via Wieden + Kennedy, Amsterdam, Dua Lipa teaches Raducanu some moves and... that’s about it. The ad comes as Raducanu, the winner of last year’s U.S. Open, prepares for Wimbledon. The ad will run in the U.S., the U.K. and France.

Dua Lipa, named global ambassador for Evian in August 2020, has appeared in previous ads for the brand. The current spot makes no claims about the tastiness of Evian water, but instead appears to be a move to bolster her brand and Raducanu’s.

For fans, it’s probably a thrill to see the pop star hanging loose with the tennis phenom.