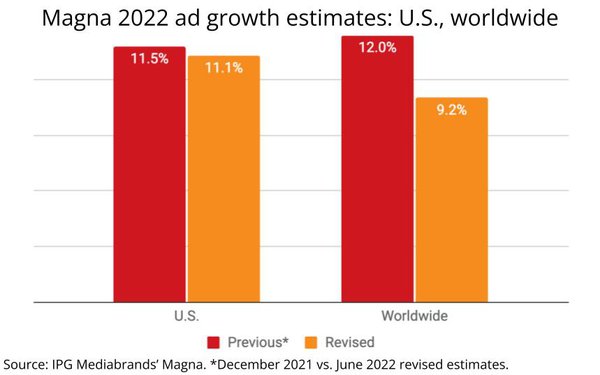 On the heels of downward revisions released earlier this week by WPP's GroupM and Publicis' Zenith units, IPG Mediabrands Magna unit also revised its outlooks for U.S. and worldwide ad spending downward from its initial forecasts for 2022.

With Magna also following suit, Madison Avenue's Big 3 forecasting units have effectively realigned their "planets" once again, because "planetary realignment" was the metaphor they concurred on when they joined for a public presentation of their initial 2022 outlooks in December 2021.

Back then, Magna Executive Vice President-Global Market Intelligence Vincent Letang described the combined economic effects driving the record growth as a "once in a lifetime planetary realignment," during an official ad forecast panel discussion this morning, as part of UBS' annual "Media Week" conference.

“This is a ridiculously strong ad market,” GroupM Global President of Busienss Intellience concurred during that briefing, adding, “I think this is possibly the fastest growing year ever in terms of the ad industry, and that is well worth noting,” he said, adding that he trolled through reams of historical data, including legendary Interpublic forecaster Bob Coen’s archives going back through the 1970s, and could not find a better growth rate.

While 2022 still is a healthy year of advertising growth in terms of the ad industry's long-term perspective, the planets appear to have realigned much more gradually than they looked in December 2021.

Magna's Letang even offered a bit of revisionism in this morning's update, stating, "Most of the headwinds facing the advertising market this year were expected: economic landing following a red hot 2021, continued supply issues generating inflation, and mounting privacy restrictions slowing down the growth of digital ad formats."

That statement comes in stark contrast to the perspective he offered in December 2021, but he added that "On top of that, the war In Ukraine now exacerbates inflation and economic uncertainty." 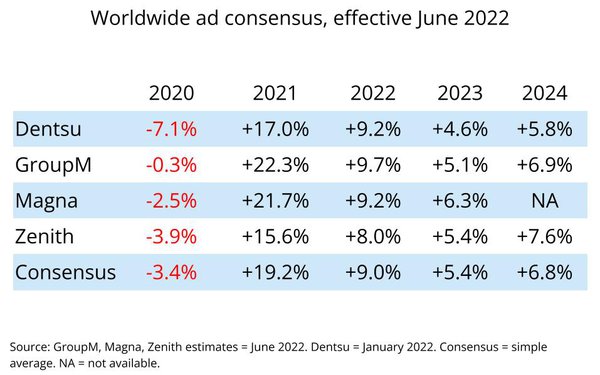 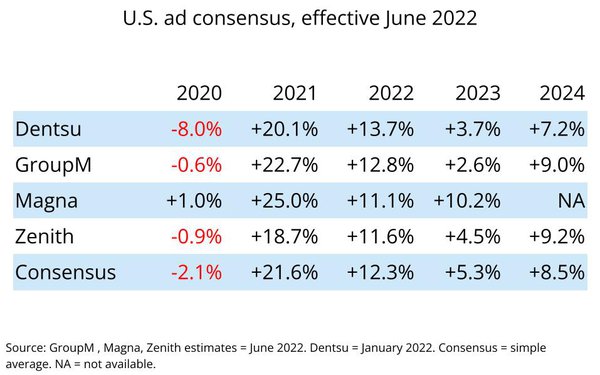