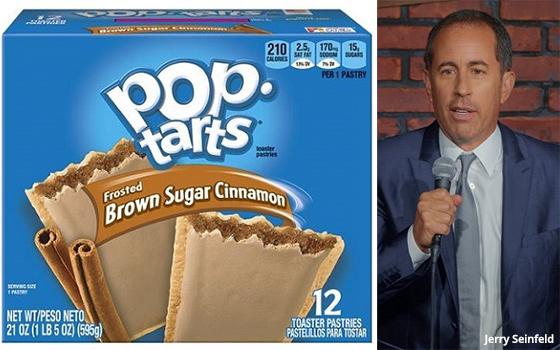 An all-star cast of actors and comedians has been announced for Jerry Seinfeld’s upcoming movie about Pop-Tarts.

Seinfeld, 68, is director, producer, writer and star of the film “Unfrosted: The Pop-Tart Story,” which he is making for Netflix. The movie represents his directorial debut.

This Pop-Tart project, which was first announced about a year ago, will tell the story of the creation of the famed rectangular toaster treats that first came to market in 1964.

Netflix’s cast announcement provided a description of the movie. “Michigan, 1963: Kellogg’s and Post, sworn cereal rivals, race to create a pastry that will change the face of breakfast forever.

Co-writers of the movie with Seinfeld are Spike Feresten, Andy Robin and Barry Marder.

Feresten and Robin were writers on “Seinfeld.” Marder was co-writer, along with Seinfeld and Feresten, of Seinfeld’s 2007 animated feature “Bee Movie.”

Though “Unfrosted” will be comedic and largely fictional, the rivalry between Kellogg’s and Post to develop a new kind of convenient breakfast pastry in the early 1960s happens to be true.

According to Wikipedia, Post was the first among the two cereal giants to develop a sealed foil package that could keep foods such as mass-produced baked goods fresh on store shelves for long periods of time.

As a result, Post was the first to come out with its own pastry, which the company called Country Squares. But Kellogg’s jumped into the fray with its own brand, Pop-Tarts, a name inspired in part by “pop art.”

Kellogg’s then overtook Post in the breakfast pastry arena and today Pop-Tarts are said to be Kellogg’s’ top-selling brand.

As Seinfeld fans know well, the comedian has a self-professed love of breakfast cereal. Cereal boxes were always seen on a kitchen shelf in Jerry’s apartment set in “Seinfeld.”

But from time to time, he has also revealed a fascination with Pop-Tarts. Among other places, he raised the subject in a 2020 standup special for Netflix, “Jerry Seinfeld: 23 Hours to Kill,” in which he described the joy he felt as a child when he came upon the toaster-ready tarts on a supermarket shelf for the first time.