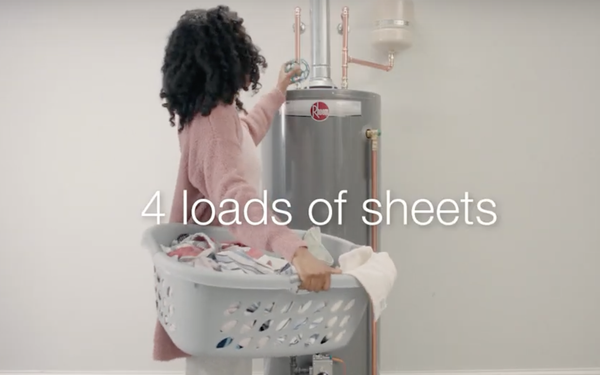 Rheem, which has been selling water heaters for nearly a century, this week launched its largest-ever consumer ad campaign, titled “Comfort since 1925 and Counting.”

Through four :30 spots, three :15s and five :06s created by Goods & Services, the sitcom-ish campaign focuses on how five multigenerational members of a diverse family use hot water in everyday moments like washing the dishes, shaving, doing laundry and cleaning dirty hands. As the graphic of one of the spots proclaims, “5 Morning Routines. 365 days of teamwork. 1 efficient water heater.”

In another spot, titled “Little Entomologist,” dad says, “Our daughter’s gotten really into bugs lately.” We next see the little girl digging up bugs in the garden and dirtying her hands. “It’s pretty gross,” groans her brother, to which dad whispers, “She’s gotten pretty gross too.”

So dad helps her wash her hands in hot water. Then the spot shows a ladybug crawling up a shower curtain, a caterpillar on a toothbrush, and a grasshopper on the sink faucet. “She’s found her passion,” says mom as she looks aghast at the latest bug, “and that alone brings us comfort.” Cue the graphic: “2 filthy hands. 4 extra baths. 1 reliable water heater.”

The ads are running through year’s end on both linear TV and streaming platforms, with Rubinacci Marketing Services executing the media buy.

Two cable networks that focus on home improvement -- Warner Bros. Discovery’s HGTV and Magnolia -- serve as exclusive linear TV outlets for the campaign, which also includes those networks’ streaming feeds, along with the streams of other Discovery networks like Science, Food and Travel.

Rheem, whose competitors include A.O. Smith, GE and Whirlpoo, said it launched the new campaign at this point due to a rise in hot water usage for such activities as cooking, washing dishes and showering brought on by the pandemic and also a rise in homeowners’ researching and specifying water heater purchases as part of increased overall home investments.

A report issued this week by Global Market Insights valued the global water heater market at more than $2.5 billion in 2021. The research firm also said that gas heaters alone are expected to reach $14 billion in sales by 2030.

Also this week, Transparency Market Research projected “massive” 10-year growth for the industry “as a result of rising demand and widespread home applications such as hot water for cooking, bathing, and cleaning,” as well as “increased demand for energy-efficient systems.”