The Next Five Years: A Conversation With The MRC's George Ivie 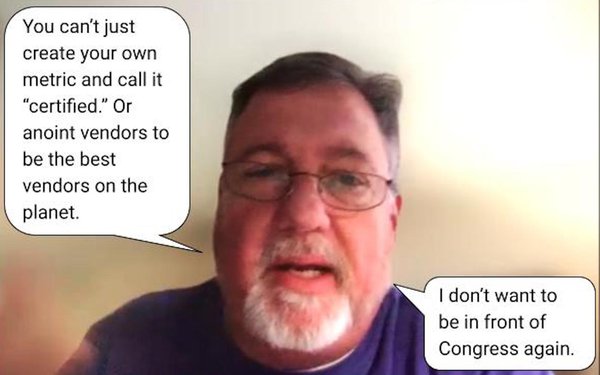 After 22 years as its executive director, the board of the Media Rating Council last week renewed George Ivie’s contact for another five years, even as it embarks on some potentially consequential new areas of auditing and standards-setting, including “outcomes-based,” cross-media, CTV, and in-game advertising measurement. The extension comes as a variety of industry players have been pushing their own standards, “certifying” suppliers and taking actions that might seem to undercut the role of the MRC, which was created as a neutral, independent industry watchdog following Congressional oversight and a consent decree with the U.S. Department of Justice to ensure audience measurement is even-handed and to avoid regulation and law-making of it. In the following Q&A, Ivie explains the reason for the timing of his new contract, the MRC’s relationship with various parts of the measurement supply chain, as well as his main areas of focus going forward.

MediaPost: Your contract doesn't come up for renewal until the end of the year. Why are you announcing this now?

George Ivie: I’ve been with the MRC for quite some time. I started January 1st, 2000 and I think the MRC leadership appreciated many of the things I’ve done, but we’re facing a lot of turmoil in the industry right now, and I think the MRC board wanted to step forward and lock in our leadership as we go through this period. And I thought that was a wise decision.

MediaPost: Speaking of turmoil, we’re seeing a number of entities in the industry trying to set standards. Does that conflict with the MRC’s role as the industry’s self-regulatory authority for measurement standards and accreditation?

Ivie: It’s not unusual that others, especially in the agency marketplace, want to use metrics to define their relationships with customers. If you go back to when we set our viewability standard, that was a tremendous change for the marketplace. And the marketplace had a lot of pain with that. At that time, GroupM came forward with a standard that said, “Well we don’t want to just use two seconds for video. We want to use a longer period of time. We wan to set more aggressive standards than MRC’s minimum standards to take better care of our clients and differentiate ourselves from other agencies.”

And to me, this feels a little bit like that. We have already set a standard for accounting for TV off and continuous play, etc. In fact, a little while ago we issued a press release on all of our television activity. It talked about our Nielsen audit and our Comscore audit and then there was a long list of CTV vendors we are auditing. And with every single one of those vendors, we’ve enforced viewability and continuous play and on/off accounting for those vendors.

This happens to us all the time. People are always trying to engineer around what we do here and there. What we try to do, is stay the course. Keep it central. Keep it consistent and do the the best job we can and that eventually carries the day.

But you can’t just create your own metric and call it “certified.” Or anoint vendors to be the best vendors on the planet when there’s no basis for that. The MRC has a structure. We have a CPA audit on it, mandated by Congress. Our members review that. Layered over that, is the independent staff of the MRC. There are seven of us who work at the MRC and we don’t work for any media company – buyer or seller – all we ever do is look at research and tell whether it’s in compliance or not.

I don’t want to lose sight of that. It’s a very important part of what we do and it’s part of why I renew my contract, because we still have a lot of work to do. We’re not done. There’s a lot to accomplish. And the independent nature of what we do is now more important than ever.

Every company I’m talking to nowadays is trying to build a panel. And two years ago, they were telling me how useless are. Now they’re trying to build panels, because they need to build cross-media measurement.

MediaPost: It feels like it’s not just media company agendas that are competing, but there are also cultures colliding. That there has been a change of power inside the big agency holding companies with digital natives taking charge and they just don’t have the patience to wait for accreditation processes the way they did in the past. Does that set up some potential liabilities for the industry?

Ivie: I don’t want to be in front of Congress again. But what’s interesting is that Google and Facebook have drunk the Kool-Aid and they’re really working extensively with us to do auditing of all aspects of their products. And by the way, so is Amazon and Walmart and Snap and Pinterest. There’s a lot of penetration in digital now.

MediaPost: The problem is those companies work with everybody and have multiple agendas and they have the resources to placate everybody.

Ivie: Well, as long as they submit their metrics I can verify them. There’s a lot of devil in those details.

MediaPost: Looking forward, has there been an update to your master plan for the MRC’s long-term agenda? When you say the next five years is going to be a lot of hard work, what should we know about that. You alluded to AI when you announced your contract extension. As complicated as the world is right now, why will the next five years be even harder?

Ivie: First of all, discerning who to trade with is going to be harder than ever. What measurement metrics to use is going to be harder than ever. And I think the MRC is a lighthouse that can help people through that. You reference unintentional consequences. Something we look at a lot right now is “modeling bias” and “AI bias.” It’s a big deal for us. It’s not unlike when we were testifying to Congress about whether everybody pushes their buttons on a TV meter. Now you have a different thing assigning identity at a unique person level and is that biased?

We have four big things that we are pursuing right now. One is that we just issued an in-game measurement standard, completely updated. It’s a big area of commerce that needs to be nailed down and regulated – the advertising that is going to be in in-game environment and how that is measured. It’s a big area.

Another one is outcome measurement. We just issued a standard for public comment on that. That’s a big deal. It creates an entirely new area of MRC auditing of outcome vendors.

And the last is cross-media. Products like Nielsen One, Comscore’s CCR. And other infrastructures that are being built by [the Association of National Advertisers] and VideoAmp and all these other vendors out there.

Just those four areas alone are tons of work, trying to standardize, get the metrics down and reported right and getting reliability and validity to it.

MediaPost: You alluded to the role of algorithms, machine learning, modeling and AI. I know you already apply judgement in your audits about those things right now. Do you think there’s a need to create industry standard definitions and best practices for those too?

Ivie: There already are pretty standard practices in place in this area to start with. There are different modeling techniques that can be applied and they are more or less standard. And we know all of those and have experts on them.

And we have built some standards information into things like outcomes and audience measurement and cross-media that deal with AI and modeling, so we’ve already created guidance within each major component. But we haven’t seen the need to come out with, let’s say an “AI standard,” or a “machine learning standard,” because training those models, updating them, having a champion/challenger model and all of those approaches, they’re already pretty standard, because it’s not just for the media business. This goes on in all kinds of businesses. So right now, we don’t have a plan to do that.

MediaPost: What about “attention metrics?” It’s become a big buzzword in the past couple of years, and lots of companies have been leaning in and some of them have been “certifying” and sanctifying suppliers. Is that an area that needs to be vetted?

It’s a little bit like a few years ago when everybody was talking about “engagement” as a buzzword for the industry and there was going to be all these industry projects to define what engagement means. You coud talk to everyone end-to-end and never reach a conclusion about what attention metrics are, so we need to be careful about it. I’m keeping a watchful eye on what’s evolving from a use perspective and we may attack it later, but not right now.

MediaPost: Well you already have a lot on your plate to fill up another five years, but as much as things have changed in the past five years, they’re probably going to change even more so in the next five. Good luck.

7 comments about "The Next Five Years: A Conversation With The MRC's George Ivie".
Check to receive email when comments are posted.
Read more comments >
Next story loading