Garfield Got It Right 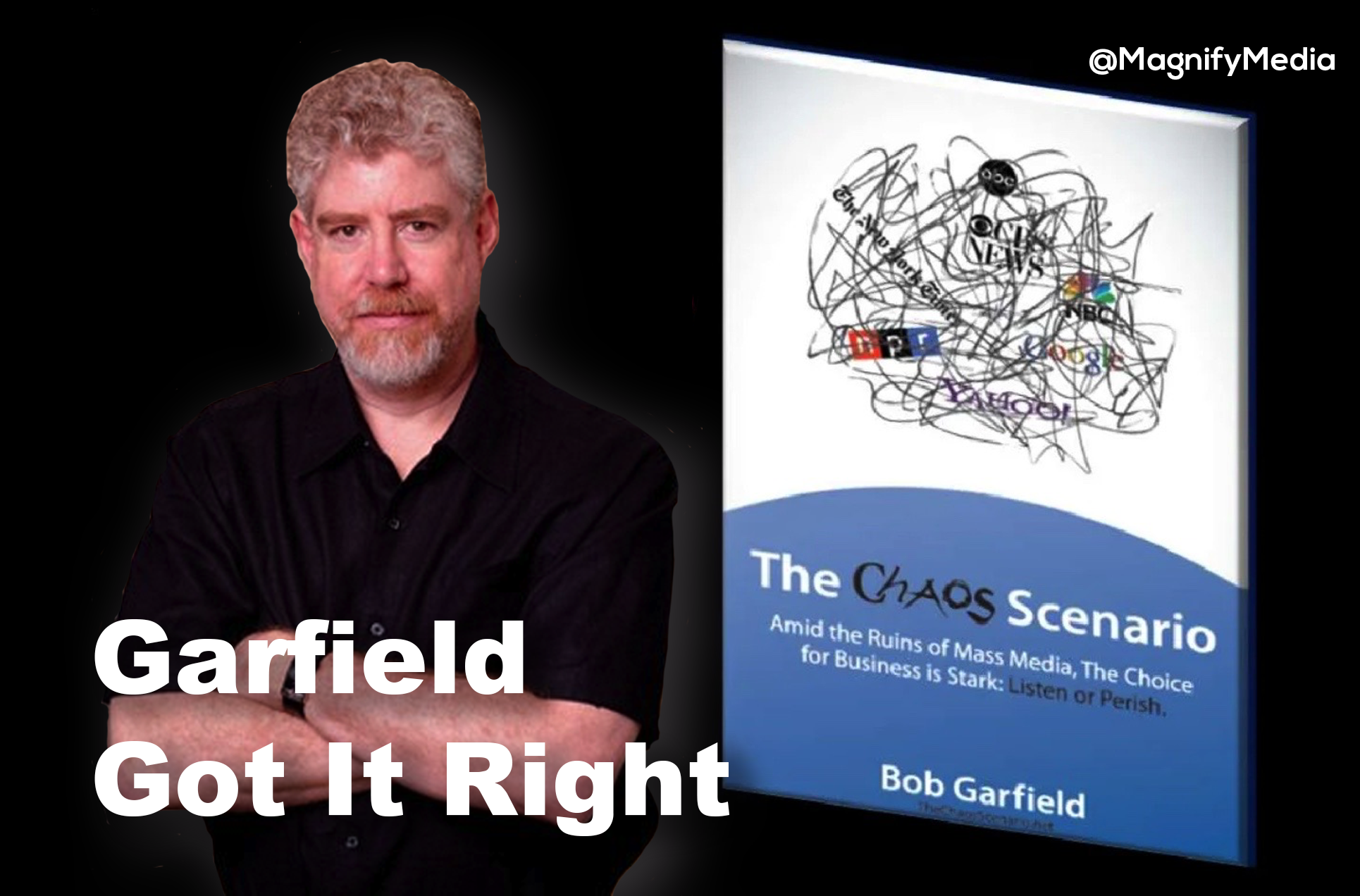 For a brief moment, I was the head of the program committee at the Albany Ad Club. For the life of me, I can’t remember why.  My job was to lure speakers to make presentations in the capital of New York state. I decided we needed to hear from the most thorough person reviewing advertising at the time. I reached out to the columnist for Adweek, who summarily said no. And so, with the event deadline looming, I scrambled and called Bob Garfield, who was the advertising reviewer for Ad Age.

I made my pitch, and he was immediately grumpy. “You’ll need to find me a story I can report for ‘All Things Considered’ if you want to drag myself to… aaalLLL BANN EEEE” he said, drawing out the name in a theatrical fashion.

At the time I ran a local news operation, and so looking for quirky stories came easy to me. Days later, we pitched him a story on the Albany Bingo inspector, and he was instantly on board. He arrived weeks later and found out that we’d booked him a rather grimy hotel, and the talk he was slated to give was being held at the OTB Teletheatre.

OTB = Off Track Betting. Bob’s talk was interrupted, often, by an announcer calling a race. It was funny the first time -- less so the third and fourth time. He left unhappy, and a week later I sent him a thank-you note with a collectors’ edition ashtray emblazoned with the OTB teletheater logo. We’ve been friends ever since.

Bob is a reporter who leads with his internal angst and formidable intellectual firepower. Over the years, I’ve watched as his subjects underestimated him -- and paid the price. Glenn Beck comes to mind, but there were many more.

Meanwhile, I had meetings about TV shows -- and sometimes, the meetings would get set up before an actual TV Show had been thought up. So, after I convinced ABC that I need to come in and pitch a show that would transition from “Nightline” to late night. Only problem, I didn’t have a show idea. Just the concept that it needed to be a game show. So, I called Bob.

Bob described his television innovation this way: "That quickly it came to me. Virtually all of it. The look: retro '60s, in the quaintly primitive fashion of ‘What's My Line?’ The format: a bluffing game, like ‘the dictionary game’ I'd played at parties, but with general information (not just word definitions). The cast: weekly regulars plus a guest celebrity. I even heard the theme music: a Henry Mancini number from ‘The Pink Panther.’ It all came cascading forth. A bona fide epiphany.”

Writing about our experiment in the Washington Post, Garfield penned: "It's 'What's My Line?' meets ‘Trivial Pursuit’ meets 'Liar's Club' meets 'My Word' meets 'Hollywood Squares' . . . It's spontaneous and outrageous and habit-forming. It's . . . 'KnowItAll!' "

Phil Beuth, then senior vice president of ABC, took us seriously for a bit -- but, as it turned out, not enough to follow through with the idea.

He lays out the whole sordid journey here. The only line that sticks in my head from the Washington Post: “I BLAME Steve Rosenbaum.” Ok, sure, I’ll take the hit.

So, last week Bob signed off. Hung up his mic. And it had me thinking about journalists, and what makes them exceptional rather than ordinary. Bob didn’t change from the first day I met him. He dove deep into stories. Got frustrated when people didn’t answer his questions. Was unreasonable in his willingness to put himself in the reporting. He often sounded irritated, because he was.

And as the Trump candidacy shifted into the Trump presidency, Bob took a four-year journey of increasing urgency, asking his fellow journalists why they seemed willing to let Trump off the hook, even as he savaged our democracy.

In the end, Bob didn’t change his style, urgency, or willingness to savage evil-doers. But I do wonder if  larger organizations that produce media have less of a taste for a generation of curmudgeonly journalists who are willing to poke their finger at the comfort zones of polite society.

Bob recorded a time capsule of his career, and it’s worth listening to. You’ll find it funny at the outset, and profoundly disturbing in its penultimate chapter. Listen here.

In a cover story Bob wrote for Ad Age in 2005, he laid out his “chaos scenario” for the “marketing industry’s coming disaster,” which he later expanded into a book.

Given where media is today, it’s hard not to see him as the purveyor of the dark art of fortune-telling.