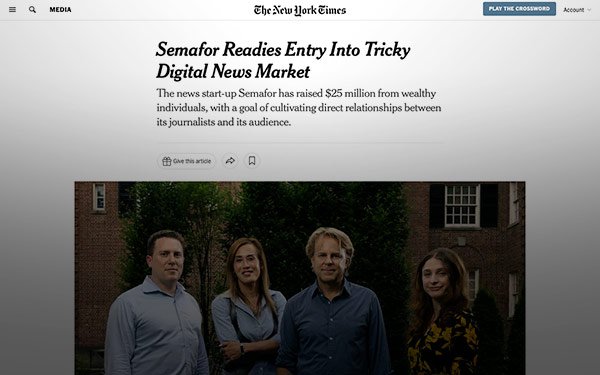 But the Times’ intense focus on a media startup that still hasn’t published a single story begins to feel excessive—taking on the elements of fandom. If only other startups with equally prominent people got the same attention. Notably, Semafor in some sense will be a Times competitor.

This week’s story is an 877-word report that fleshes out the areas of focus, the approach to journalism, the financial backing, and new hires. One interesting detail: News articles will be broken down in sections that attempt to separate factual information, analysis from the reporter, and perspectives from other observers and sources. Another: Bylines will be as large as headlines.

The report also corresponded with a prominent Semaphor Twitter announcement that referenced the Times story. “Hello world!,” the thread began. “We’re a new global news brand and platform, launching this fall with the goal of addressing the crisis of trust in news. Sign up today to be part of our launch.”

“We have a few hypotheses on how to address this trust crisis, which you can read about in today’s @nytimes,” it continued. The third hypothesis was this: “That readers will trust you more if you leave space for disagreements of interpretation, and include dissenting voices.”

And that’s where Twitter commenters had a problem. Leaving space for disagreements and dissenting voices sounds a lot like the traditional journalistic approach, where reporters quote, for example, the Democratic perspective, juxtaposed with the Republican viewpoint, and therefore believe they’ve done their jobs and the reader can sort things out from there.

But that approach is now almost universally derided as “both-sidesism,” a practice that creates a false equivalency between fact and propaganda, truth and lies. This has become especially urgent in the Trump era, where lies from the president were ubiquitous (and continue in his post-presidency) and elements of one party have become dangerously radicalized, a threat to democracy itself.

In that environment, “disagreements of interpretation, and dissenting voices” becomes suspiciously similar to a widely discredited style of journalism.

The Times story specifically mentioned a Semafor event business, with a focus on news and trust. A July event will feature a roundtable where Ben Smith will interview three media figures, including the Fox News host Tucker Carlson.

Carlson is notorious for framing nearly all of his commentary as a nefarious “them” against “you” plot, with the “you” being “real” Americans and the “them” being elites, Democrats and immigrants. He repeatedly argues that Democrats want massive immigration from third-world countries to permanently change American demographics and by doing so, gain permanent power. Variations on this theme are known as the “Great Replacement Theory,” espoused by white supremacists and cited by some white mass killers.

Carlson is not the kind of person likely to help fix a crisis of trust in the media.

“You're going to address the 'trust crisis' and your first guest is carlson??” one Twitter comment read. “Wtf.”

“You’re giving Fox News—so, fascism—claim to legitimacy by having Tucker Carlson on a panel,” another said. “This is what the news media already does too much of: false equivalency of both sides when one side is literal fascism.”

A third comment: “Oh sweetie. One side saying the sky is blue and the other claiming it is bright green isn’t a dispute of opinion. We need facts based reporting and based on your warm welcome of The Frozen Food King [Carlson], you’re not it.”

And so it went for Semafor on Wednesday.