The GOP Gang That Could Shoot Straight... Into Their Own Feet 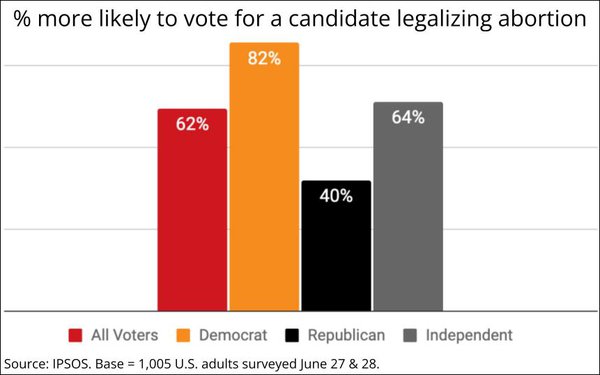 If Republican media spinmeisters wanted to shoot themselves in the foot heading into the 2022 midterm elections, they couldn’t have picked a better target than the Supreme Court’s ruling overturning Roe v. Wade.

In the aftermath of the ruling, nearly two-thirds of all Americans say they are more likely to vote for a candidate in November who supporta passing a law giving all Americans the legal right to abortion, according to the latest polling by IPSOS.

While only a minority (40%) of Republican voters said so, two-thirds of Independent voters and 82% of Democratic voters said they were more likely to vote for such candidates.

In other words, one step forward and two missteps backward for Republican candidates in the upcoming midterm elections.

The SCOTUS ruling overturning Roe v. Wade may have been decades in the making, but the timing of the decision is motivating voters at base emotional levels, according to the IPSOS study, including making them angrier and more fearful about the future under Republican control.

In terms of media spin and voter sentiment, it’s the latest in a series of ill-timed miscalculations by the Republican party, which theoretically should have a cakewalk heading into November, especially given the weakening economic sentiment of American voters. I mean, it still is – and likely always will be – the economy, stupid.

That’s pretty much what IPSOS political expert Chris Jackson said during his most recent midterm assessment a few weeks ago – before the SCOTUS ruling.

Prior to its abortion ruling, Jackson said economic angst was leading as the biggest election issue by a wide majority – “not as dominant as it was during the Great Recession of 2018,” but enough to make a Republican midterm sweep more likely than not.

The next biggest issue – the rising concern of American voters about gun violence – also continues to be topical and incessant at this point heading into the midterms (I mean, just check the news almost any day these days and you’ll read about some crazed mass shooter armed with military-grade assault weapons).

But if you ask me, the greatest miscalculation by the Republican Party was the decision by its leadership not to participate in the January 6th Committee.

Recent reports have suggested that the GOP leadership now realize what a grave mistake that was, giving them little control over or input into the way the committee has been holding its hearings, which dominate the news cycle when they do.

The reality is that the committee tried to make the hearings bipartisan, and even have two of the Republican party’s actual patriots in highly visible roles, which one – Liz Cheney – could ride all the way to the White House in 2024.

But back to the midterms. I think Republicans must be kicking themselves over their decision to sit out the hearings, even as some of them are still likely to participate as witnesses (if they ever choose to honor the committee’s subpoenas) or at the very least, as part of the evidence and testimony of witnesses who continue to testify.

And the committee’s hearings won’t be the only show in town heading into November (see the Georgia Grand Jury’s subpoenas of Senator Lindsey Graham and the former president’s henchman Rudy Guiliani.

In other words, maybe it won’t just be the economy this November, unless you truly are stupid.