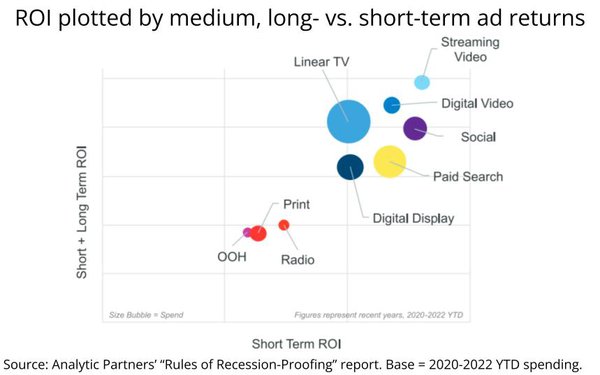 As the U.S., and parts of the rest of the world, enter an economic recession -- technical, or otherwise -- it ironically could be a boon for the most high-demand media, as well as brand vs. performance advertising. That's the conclusion of a new "recession-proofing" report from a highly-regarded analytics firm specializing in marketing ROI (return on investment).

"While the temptation during a potential recession might be to focus on the short-term, long-term thinking should always be the priority for brands looking to future-proof against challenging times," the analysts at Analytic Partners write in "The Rules of Recession-Proofing" report being released this morning.

"While lower-funnel activities, like search and display, might seem to be the best options for marketers aiming to achieve instant ROI, those kinds of short-term activations underperform their long-term counterparts over time."
The report, which draws on years of marketing ROI analytics, based on billons of dollars of ad spending, also reinforces a classic truism of recessionary cycle marketing: that brands that cut ad spending in categories where their competitors maintain or increase it, historically lose vital market share.
In fact, the analysts have actually computed some math based on studying the history of brands operating in such cycles and it estimates that, on average, a brand will lose nearly 15% of its market if a "similarly-sized competitor doubles its marketing investments" during an economic down cycle.

Overall marketing budgeting aside, the sweet spot of the report is in its recommendations relating to mix, especially its strong case for emphasizing brand-building advertising vs. "performance" marketing and media, the kind known to generate near-term sales, conversions, clicks and other actions.

Marketers who heed that advice could help turn a tide of overall ad industry spending toward search, social and other performance-oriented media and shift spending back toward media -- especially traditional TV, streaming and online video -- known to help build brands over time.

The report, however, notes that the quality of the creative messaging in TV and video advertising, is a big factor in that equation, contributing an estimated "two-thirds" of the impact of ad campaigns for the brands using the media.

Other key findings in the report include an ongoing rise in the share of "targeted media" (currently 75% of all media options, up from 55% five years ago), and that "contextual targeting" -- the kind that leverages the context of the medium and its content vs. the identity and/or behavior of the audience -- is "1.2 to 2.5 times more effective than other forms of advertising."

The report's bottom line is that brands that "play the long game" during a recessionary cycle have the "best odds of success" coming out of it.

"While lower-funnel activities, like search and display, might seem to be the best options for marketers aiming to achieve instant ROI, those kinds of short-term activations underperform their long-term counterparts over time," the report concludes.