Americans Deem Ad Biz More Trustworthy Than Media, Both Trail All Other Industries 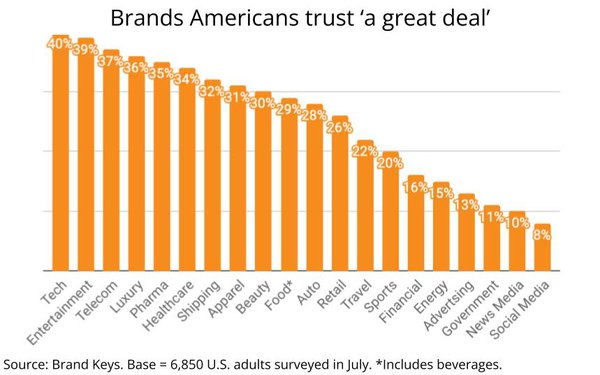 The good news is that as far as brands go, the ad industry is deemed more trustworthy than much of the media it buys to reach consumers. The bad news is that the ad business, "news media," and "social media" all rank at the bottom of all brand categories American consumers were asked to rate as trusting "a great deal" recently.

The findings, which were announced Tuesday via a press release from brand researcher Brand Keys noting that "media brand trust took a nosedive" in its most recent tracking study, which surveyed 6,850 U.S. adults in July.
"Consumers [are] three times more likely to trust their shampoo brand than news media," the releases subhead noted.
And while shampoo was not broken out as a category, 30% of Americans have a great deal of trust in the beauty/personal care category, which ranked ninth in trust among the 21 categories shown in the report.
Technology ranks No. 1, with 40% of Americans saying the trust it a great deal, followed by entertainment (39%), telecommunications (38%) and luxury goods (36%).
At the bottom, social media ranks worst, with 8% of Americans trusting it a great deal, followed by news media (10%), government (11%) and advertising (13%).

“Because trust is central to consumer behavior and brand profitability, we were curious to see precisely where News Media and TV News brands rated when it comes to the value of ‘trust,'" says Brand Keys Founder and President Robert Passikoff, noting that the curiosity was piqued by the 11th wave of an ongoing tracking study Brand Keys has been conducting for MediaPost about news media brands.

"All the TV news brands saw drops in viewer trust with virtually no differences among the TV brands by gender or political persuasion," he explains.

2 comments about "Americans Deem Ad Biz More Trustworthy Than Media, Both Trail All Other Industries".
Check to receive email when comments are posted.
Read more comments >
Next story loading