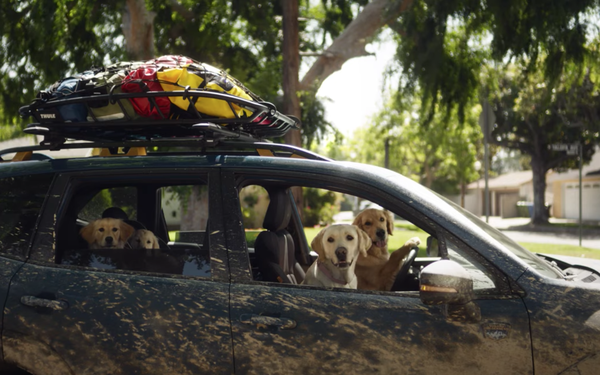 The beloved Subaru Barkley Family is back and ready to prove that Subaru vehicles continue to be “Dog Tested, Dog Approved.”

The series features six spots of the Barkleys and their adventures in the Subaru Crosstrek, Forester Wilderness, Outback Wilderness and WRX vehicles.

The campaign, from Carmichael Lynch, is running exclusively on Animal Planet.

“Subaru has a long-standing relationship with Animal Planet, and given the synergies between their audience and programming and our brand objectives, we felt this was a strong place to run the 'Dog Tested' spots first,” per a spokesperson for the automaker, adding that this is a first for the company.

“We primarily only run 30s in linear, so this is a test capability to see how our 15s are received in that space,” the spokesperson says.

The brand has long played up its support of rescue dogs via both a fundraising effort and adoption events at auto shows and its dealerships.

Since 2015, Subaru retailers have partnered with local animal welfare organizations through the Subaru Loves Pets initiative to impact over 230,000 animals in need across the country.