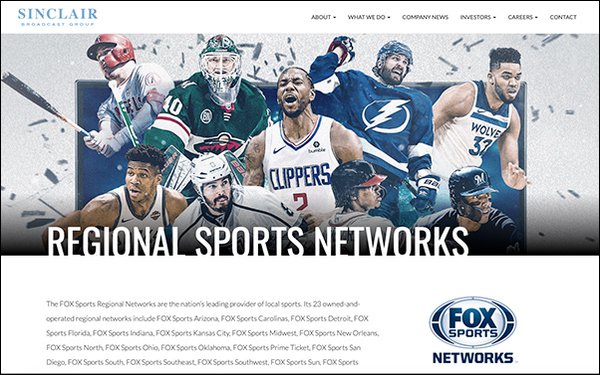 Distribution revenue also suffered in the quarter, declining to $430 million, less than half the $1.1 billion it reported a year ago.

Taking out regional sports, Sinclair says its broadcast operations revenue rose 5% to $801 million. On that basis, distribution revenue was up 4%, but advertising fell 3%.

The company said it has “deconsolidated” Diamond Sports from its financial results starting in March 2022.

A year ago Diamond Sports posted $838 million in revenue, which included $666 million in distribution fees and $162 million in advertising revenue.

Overall, Sinclair narrowed its net loss to $11 million versus $332 million a year earlier. But its cash flow -- the adjusted EBITDA (earnings before interest taxes, depreciation, and amortization) -- sank 58% to $183 million.

Sinclair said it took in $54 million in political political advertising during the quarter, well ahead of the midterm elections.

At the same time, core advertising during the period sank a big 36% to $312 million due to the lower Diamond Sports results, as well as weaker services and sports betting advertising categories.