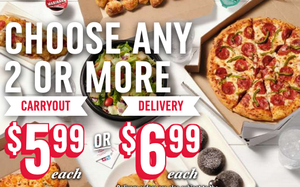 Inflation has hit the fast-food giants -- and they are fighting back by shrinking their value menus, and sometimes downsizing their entrees while raising prices.

Prices for meals away from home jumped 7.7% in June 2022 compared with June 2021, according to the U.S. Department of Agriculture. Some chains have raised prices. Domino’s Pizza raised the price of its Mix & Match delivery deal from $5.99 to $6.99 and made its $7.99 national carry-out offer available only for digital orders.

Burger King also removed the Whopper from its value meal and reduced its 10-piece nuggets to eight pieces (Burger King made the same reduction in its nugget meals.) In addition, some chains are reducing the size of their portions, a phenomenon Yelp customers have observed. Meanwhile, Redditors claim McDonald’s has reduced the size of its Big Mac.

Not all chains are shrinking their entrees at the same rate. The U.S. Sun ran a survey that found Five Guys and KFC skimped on the weight of their fries and charged the most.

Many fast-food consumers are aware of shrinkflation and don’t like it. About 56% of U.S. diners say they would be willing to pay a bit extra if restaurants clearly explain why prices are rising, according to a survey commissioned by MarketMan.

As they raise prices, fast-food chains are trying to get consumers to use mobile apps and rewards programs that offer personalized deals, which lets them make more money off each customer. At McDonald’s, customers get a free order of large fries and 1,500 bonus points for downloading its app and signing up for its reward program.