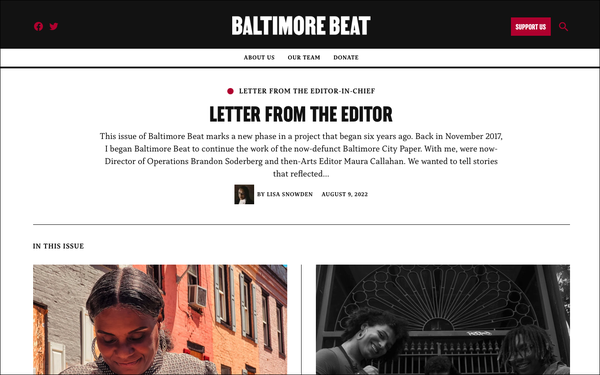 The Baltimore Beat, a Black-led alternative publication, has returned—this time as a nonprofit print and digital publication.

The title was founded in November 2017 by Lisa Snowden as as a replacement for the defunct Baltimore City Paper, but shuttered after four months, according to NPR.

The paper turned from “a for-profit paper (available both in print and online), to a nonprofit news outlet available only online," and as of this week, "a nonprofit print newspaper again available for free all across the city as well as on your favorite digital device,” Snowden wrote last week.

“We wanted to tell stories that reflected the fact that Baltimore City’s residents are more than 60% Black,” Snowden recalled of the initial launch. “We wanted to give Black writers the opportunities to tell their own stories."

In a statement of values, Snowden wrote, “We do not believe there is a difference between arts coverage and hard news and understand that art is inherently political,” NPR reports.

The publication will also serve an educational function for journalists.

“Journalism is not a career where you're going to make a lot of money,” Snowden told NPR. “It's worse if you're Black. And not only that, but if you're Black, you're often the only Black person or maybe one or two or three others in the newsroom.”

Snowden continued that “we really wanted The Beat to be a place where Black journalists can get an education, can stay here if they would like to make a life in Baltimore or get their clips and maybe move somewhere else.”

Last week, Snow wrote, “I hope that Baltimore Beat is a place that challenges and informs this city. I hope that we inspire new waves of people to contribute to Baltimore and help change it for the better.”