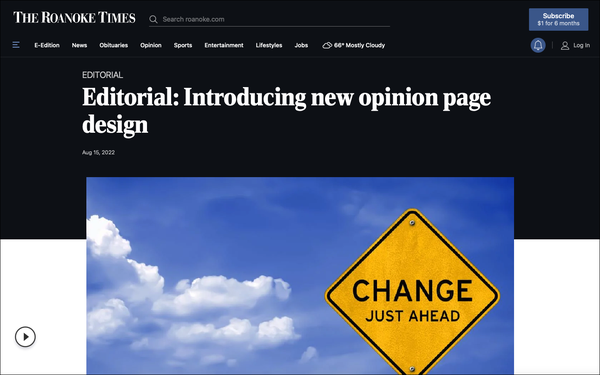 Lee Enterprises, the country’s fourth-largest newspaper chain, is distributing national opinion pages to all of its newspapers, resulting in format changes at local papers.

These new editorial pages, consisting of commentary on national issues and think pieces written by the editorial boards of papers nationwide, will appear on Tuesdays and Saturdays, at least in The Roanoke Times, that paper reports.

Sundays will feature a pro-and-con page exploring two sides of a current national topic, along with staff-written columns.

On Fridays, Sundays,, Mondays and some Thursdays, readers will see editorials on local matters written by staff.

These national pages are being assembled by Lee Enterprises National Opinion Editor Scott Milfred, who also serves as opinion editor for the Wisconsin State Journal.

“Milfred has emphasized a policy of maintaining balance across political spectra,” the Times notes.

While such an plan might give opinion pages a canned feel, the Times asserts that “All the local features you’re used to will still be around, just slightly rearranged.”

At first glance, the new approach seems in contrast to that pursued by Gannett, the country’s largest newspaper chain, which unveiled a plan to radically shrink opinion sections earlier this year.

However, the chains may share a desire to avoid drawing critical fire in this time of explosive views.

“Readers don’t want us to tell them what to think,” Gannett  editors stated  in an internal presentation, according to The Washington Post. “They don’t believe we have the expertise to tell anyone what to think on most issues. They perceive us as having a biased agenda.”