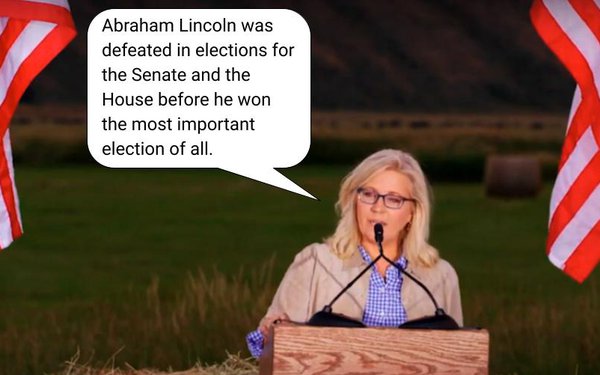 Liz Cheney ended her 2022 House reelection campaign Tuesday night, but accelerated her 2024 one by kicking off her own version of a "Lincoln" project, noting that he too lost elections for Congress before winning "the most important one of all."

While it may have seemed like a concession speech to some, it was just the beginning of her next campaign. And she's even got a working slogan to go with it: "The Great Task," which draws upon the line from Abraham Lincoln's Gettysburg Address vowing to ensure that "the government of the people, by the people and for the people shall not perish from this earth."

In other words, Cheney is now campaigning fully on the basis of preserving American democracy, and without the political harangue of her Wyoming seat, and as vice chair of the January 6th Committee, I can't think of a better place to do it.

The Republican party may wax nostalgic for Ronald Reagan's "Morning Again In America," which has been appropriated and bastardized into "Make America Great Again," but it was Lincoln's task that made the Republican Party great in the first place, and Cheney is picking up his mantle.

And while pundits already predict that there's no way she could defeat the twice impeached former president in a Republican primary should he choose to run again, even as he faces numerous criminal investigations, including ones related to the January 6th attack on Lincoln's task, I don't think it really matters at this point, because Cheney already is the Republican frontrunner for preserving the rule of law, as well as democracy in America.

"As we meet here tonight, that remains our greatest and most important task," Cheney said, making a strong case that we "our nation is barrelling once again toward crisis, lawlessness and violence," much of which is being egged on by her own party, which is endorsing, promoting and electing election deniers and conspiracy theorists.

And while her immediate task will be to fight them, I can't think of a better platform for her to mount a 2024 bid, whether it's in the Republican Party or not.