Wide Blue Yonder: Profits, That Is 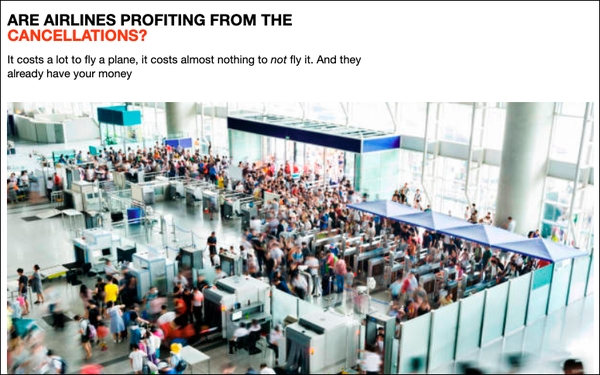 When Bob Guccione Jr. gave me an early look at an advanced draft of an important expose about U.S. flight cancelations published by his travel journalism site Wonderlust Travel this week, I thought it was going to be an indictment of an industry. Well, it was, just not the industry I thought it would be.

Yes, the investigative piece does expose some questionable practices by the airline industry, especially the fact that the major U.S. airlines actually generate more profits by cancelling flights than they do by fulfilling them. But it also exposes an equally concerning practice by another major U.S. industry: journalism. Specifically, the fact that there have been oodles of headlines about flight cancellations, but none -- until now -- about the real reason why it's happening: profit margins.

"The airlines keep saying that it's the weather, but only a small portion of flights are affected by weather," Guccione told me after I read the draft and asked why the media haven't been covering that profit-taking has been the real motive.

By taking consumer's payments, and providing travel credits in lieu of refunds, the Wonderlust story exposes the fact that the major U.S. airlines have been generating millions of dollars daily in savings.

"The savings drop to their bottom line, because it's money they're not spending," Guccione explains, adding that the airlines rarely offer or inform consumers they are eligible for refunds, even though that is required by law.

The problem, he says, is no one has been "holding their feet to the fire," meaning the media. Instead, the U.S. press have been covering the airline industry as if it has been a victim of circumstances -- weather, supply chain and fuel cost issues, labor shortages, etc. -- instead of investigating why the airlines haven't had an incentive to fix the problem.

And if you ask me, that also goes a long way toward explaining why consumers haven't been up in arms calling on regulators to take the airlines to task.

Read "Are Airlines Profiting From The Cancellations?" and tell me what you think?