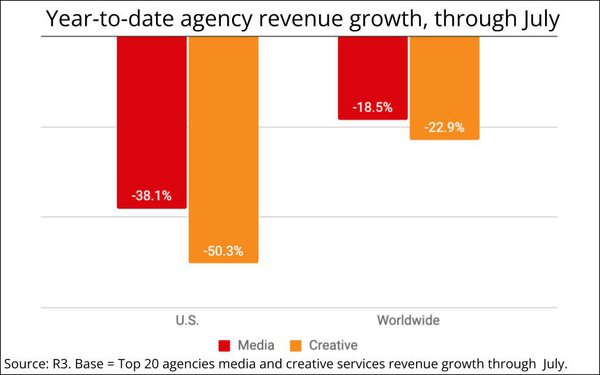 Compared with the same period last year, 2022 is proving to be a rotten year for agency news business, especially for creative services, according to an analysis of the first seven months of the year released by advertising management consulting firm R3.

Aggregate revenue news business revenue has fallen more than 50% for the top 20 creative shops in the U.S. and by 23% worldwide, according to R3's July "New Business League" report.

While new business revenue among the top 20 media services agencies has not eroded as much as their creative counterparts, it is down 38% in the U.S. and more than 18% worldwide.

The contraction likely represents tough comparisons with high growth rates for the same periods in 2021, but also the growing uncertainty of U.S. and global economies amid recessionary and inflationary concerns.