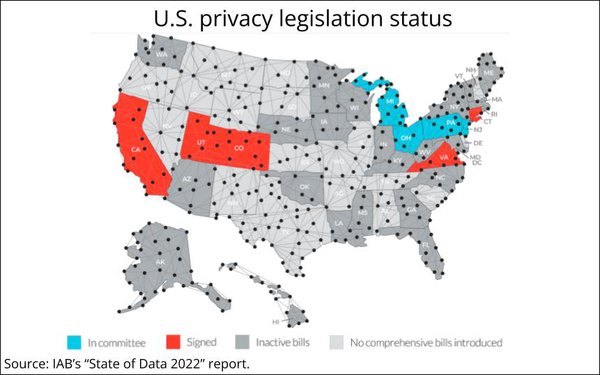 If a picture is worth a thousand words, one included in a report being released this morning by the Interactive Advertising Bureau (IAB) should send shivers up and down Madison Avenue. The picture -- a chart delineating the status of various state consumer privacy legislation, is part of a report arguing that the biggest threat to that ad industry's "signal loss" isn't moves by Apple and Google to deprecate cookies and identity trackers, but the multitude of legislation.

“While Google’s decision to postpone the deprecation of third-party cookies until 2024 may feel like a reprieve, the industry is far from off the hook,” IAB CEO says in a statement included with an early look at the IAB's "State of Data 2022" report being released to the industry this morning.

The report, the sixth installment of a tracking study initiated by the IAB five years ago, estimates the U.S. ad industry already has lost "approximately 50% to 60% of the signal fidelity from third-party identifiers" due to steps taken by Apple and Firefox's browser, even before Google's deprecation of web browser cookies in 2024.

"This, coupled with impending changes to the regulatory landscape and potential actions by the Federal Trade Commission, demands an immediate re-evaluation of the ecosystem," the report asserts, noting that "the biggest immediate threat to the industry is inconsistent and poorly crafted state-level privacy legislation."

Specifically citing new laws or updates to preexisting ones poised to take effect in 2023, as well as various new international regulations, the report indicates most advertisers, agencies and publishers are not prepared to adapt.

Asked to to rate on a scale of one to five (with four/five representing "highly prepared"), advertisers scored themselves a 3.6, agencies a 3.8 and publishers a 3.6.

“I think preparation is really subjective right now," says an anonymous executive representing a "large brand" marketer quoted in the report. "We've been working on a variety of approaches to a strategy that continues to evolve because we haven't reached maturity for some of the things we consider viable for the future. I would say, despite all the progress we've made, it's irresponsible and premature of us to be anything further than that. I think we'll continue to be a 3 to 4 for another few years.”

"Consumers need transparency and control," concludes the IAB's Cohen, adding, "We need addressability and measurement solutions that are privacy-by-design and fully compliant with state, federal, and international standards.”

1 comment about "IAB: More Than Half Of Ad Data Signals Already Lost, Warns Legislation Is Greatest Threat".
Check to receive email when comments are posted.
Next story loading