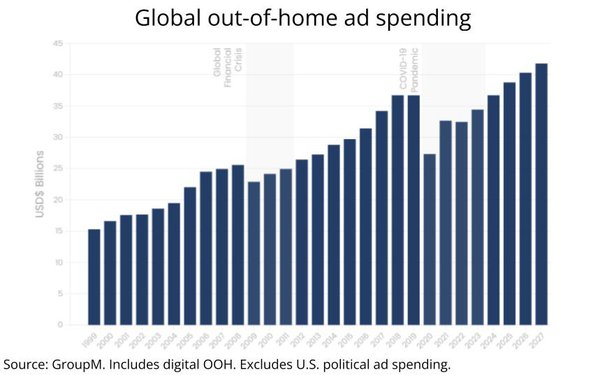 "Just looking at our out-of-home numbers in the U.S., we're definitely expecting it to be back above 2019 levels this year," GroupM Global Director of Business Intelligence Kate Scott-Dawkins said during her weekly podcast co-hosted with Global President of Business Intelligence Brian Wieser. "And obviously, whether the channel has recovered this year or next year various by individual market."

Both she and Wieser noted that unlike digital media, which boomed during the pandemic, out-of-home is one that dipped and is showing a recovery coming out of it.

They also noted that the out-of-home media industry is benefitting from two strategic shifts among its big suppliers: one catering more to the needs of national advertisers for what has fundamentally been more of a local targeting medium; and another indicating they are investing heavily in converting their out-of-home displays from analog advertising to digital.

Scott-Dawkins noted that only 7% of major supplier Clear Channel Outdoor's display inventory is digital, but that it generates 40% of its revenue.

The team were far less bullish for another out-of-home advertising segment -- cinema advertising -- which has also been in recovery, but the medium's future is less certain because of speculation that Hollywood studios may be releasing less of their films directly to theaters vs. streaming services.