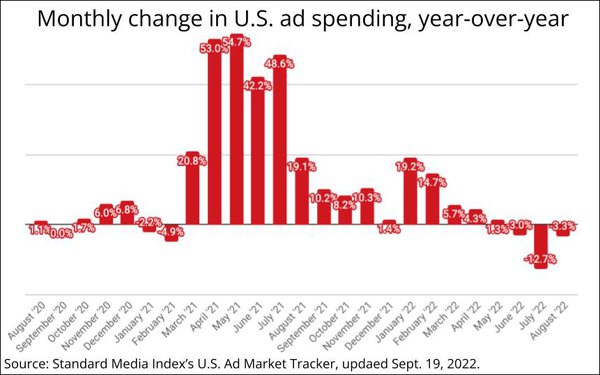 The U.S. ad economy continued to recede for the third consecutive month in August, albeit at more moderate rate than July’s nearly 13% decline, according to a MediaPost analysis of data from Standard Media Index’s just-updated U.S. Ad Market Tracker.

With better comps vs. year ago numbers, U.S. ad spending declined only 3.3% in August vs. the same month a year ago.

The update also comes amid growing angst about a broader economic recession in the U.S. and in other key markets worldwide, as well as lingering concerns about inflation, the supply chain, the stock market and other key economic indicators.

The pullback continues to be among the biggest ad advertisers, as the top 10 ad categories fell 5.1% in August, while all others fell only 0.9%.