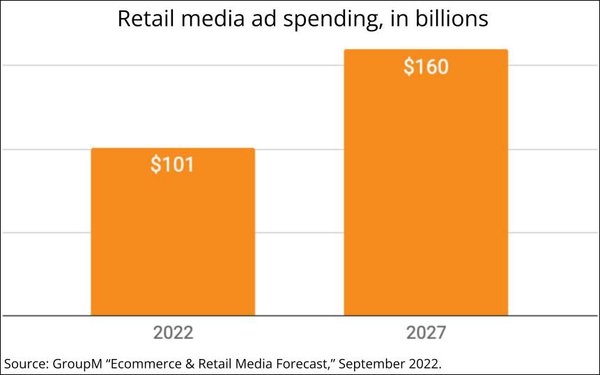 Fueled by the rapid expansion of digital ecommerce, a new $100 billion-plus advertising category -- so-called "retail media" -- has emerged and it already represents nearly 10% of global ad spending, according to a new report released this morning by WPP's GroupM unit.

"We expect retail media to grow 60% by 2027," GroupM Global Director of Business Intelligence Kate Scott-Dawkins said during a press briefing before the release of this morning's report, which benchmarks retail media ad spending at $101 billion this year and projects it will rise to $160 billion by 2027.

"We think [our forecast] potentially is on the conservative side," she said, adding that future dynamics of both physical retail and ecommerce could "quickly" accelerate the rapidly emerging retail media ad spending to as much as $500 billion by 2027 depending on "a lot of factors."

Interestingly, GroupM's analysis implies the retail media category is primarily a subset -- 18% -- of digital advertising, and does not seem to explicitly factor much if any of the billions of dollars in historic retail ad spending historically known as "co-op advertising," which comprises analog media by brand marketers in physical media such as FSIs (free-standing newspaper inserts), circulars, and a variety of in-store media that sometimes get accounted for not as advertising, but as "slotting allowances," and other terms.

"There are certainly aspects of it that are blending between trade sales – or sales and marketing – and traditional media budgets," Scott-Dawkins explained, adding that while those categories historically have been "much more separate," they are starting to blend in the way they are accounted for and reported by big marketers, whether they are retail ones or brand marketers distributing their products at retail.

Additionally, there is a rapidly emerging segment of "non-endemic" advertisers utilizing retail media buys to extend their reach and target consumers independent of any physical distribution of their products through retail channels.

Scott-Dawkins said GroupM's new report does not estimate the size of the non-endemic retail media ad market, or its growth rate, nor does it account explicitly for the amount of it coming from analog media sole by retailers.

The main reason for that is that GroupM's approach to ad spending estimates and forecasts is derived mainly from a "bottoms-up" approach of analyzing ad revenue data reported by media companies -- in this case, media companies that also happen to be retailers.

A MediaPost search for current estimates for analog retail media spending in traditional sources such as FSIs, store circulars, in-store displays, etc, didn't yield an explicit current number, but one of the largest processors of retail coupon media -- Inmar Intelligence -- currently boasts $120 billion in promotion-related commerce, though it isn't clear what percentage of that constitutes media buys, much less analog ones.

Scott-Dawkins noted that much of those promotional deals between retailers and brand marketers are also accounted for as a "reduction in cost, so they wouldn't be captured here."

The bottom line is that GroupM has benchmarked retail media conservatively at a more than $100 billion category and that it is growing rapidly within one of the fastest growing sectors of overall marketing: retail and ecommerce. 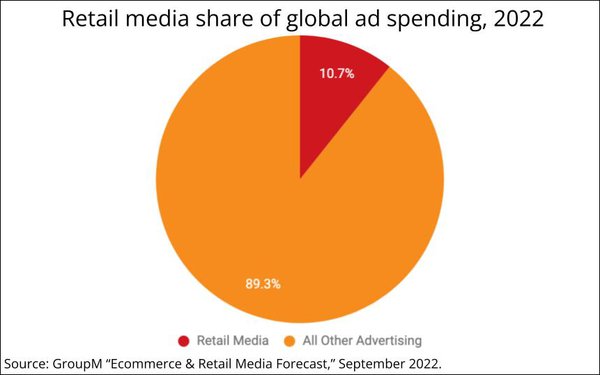 Ecommerce's penetration of retail varies by market, but the overall category is dominated by a handful of U.S. and Chinese companies -- ranging from pure-play digital ones like Ailibaba to Amazon to traditional retailers like Kroger and Walmart -- and Scott-Dawkins liked that consolidation to the one that has led to the domination of the digital advertising marketplace by big platforms such as Google, Facebook, Amazon and Microsoft. 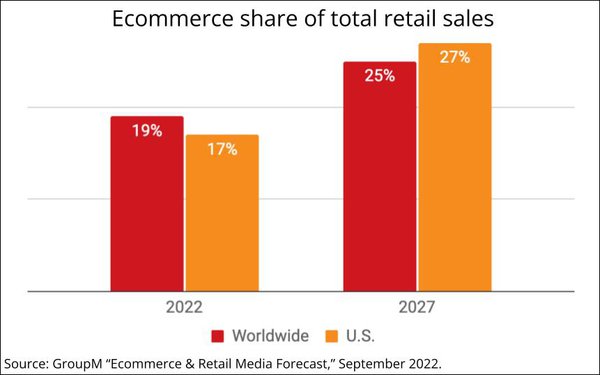