Taco Bell Puts Its Own Spin On National Taco Day 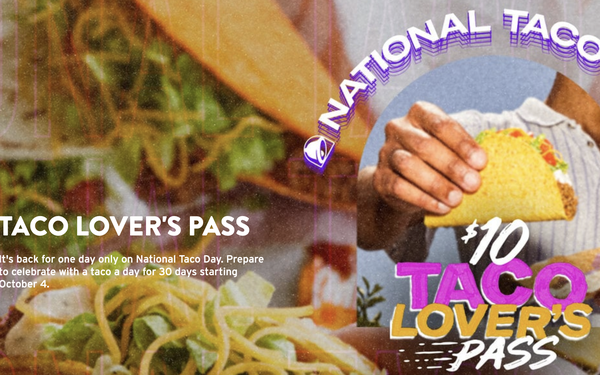 Taco Bell is turning National Taco Day into a month-long celebration with the limited-time return of its digital taco subscription, Taco Lover’s Pass.

The deal will be offered exclusively via the Taco Bell app for Rewards members for one day only: Oct. 4, National Taco Day. The Pass allows fans to get a free taco for 30 consecutive days for $10.

Pass holders get to choose from seven kinds of taco, including the Crunchy Taco, Crunchy Taco Supreme, Soft Taco and ot

The Taco Lover’s Pass first debuted in January and the offer lasted a month. It was essentially a subscription service that was dependent on customers downloading the app.

When offered in January, some questioned the logic behind Taco Lover’s Pass. “Who could eat only one taco at a time? We know we can’t,” read a writeup in Leo Weekly.

Taco Bell initially launched a trial of the subscription in Tucson, Arizona, last fall and found that 20% of Taco Lover’s Pass purchasers were new to the chain’s reward program. An additional 20%  renewed the Pass a second time.