The Heart Of Darkness, Turns Out It's 6% 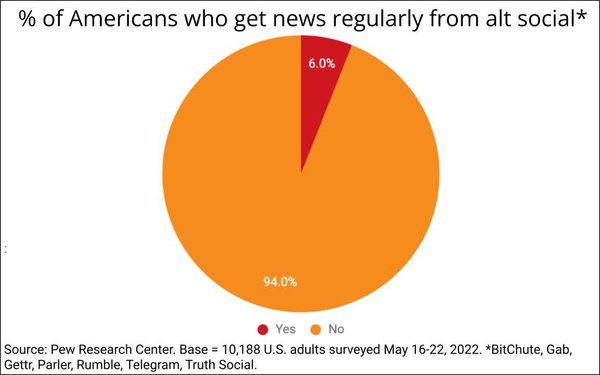 I've spent years writing about "dark" media universes -- meaningful segments of consumer media usage that go unmeasured, and therefore, unaccounted for by media pros, including advertisers, agencies, etc. -- and now we have a benchmark for one of them: "alternative social media" platforms. According to new research released this morning by the Pew Research Center, about 6% of Americans now get their news regularly from these platforms, including BitChute, Gab, Gettr, Parler, Rumble, Telegram and Truth Social.

I'm not sure how Pew defined that universe, or why it left out things like 4Chan, 8kun (formerly 8chan), a variety of subreddits, and other new, emerging, clandestine, and even darker sites, apps and/or P2P communications platforms that I don't even know about.

What I do know, is that "dark social" has existed as long as there has been "lighted" social media, and -- with apologies to Pew -- it is actually the dominant form of social interaction.

I know this from earlier benchmark analyses now defunct content-sharing analytics platform Tynt share with me when it was still a startup and before it was acquired by 33across and it more or less went dark.

But more than a decade ago, its founder Derek Ball shared data with me utilizing its ingenious method of tracking what digital media platforms people cut-pasted-and-shared content with others on. What it found was that 70% of content-sharing was done via "dark social" platforms -- mainly peer-to-peer media such as email, SMS, and the burgeoning marketplace of direct messaging apps -- not on well-lit social platforms like Facebook, Twitter, Instagram, Pinterest, etc.

Moreover, Tynt also found that it wasn't just the volume of content-sharing taking place in the dark social universe, but the type of content people shared -- often the most sensitive, proprietary or dicey stuff you wouldn't necessarily want your mainstream social media followers to know or see.

So I've spent the past decade wondering what new ways people were sharing the kind of "alternative facts" that have contributed to the alternate realities that have been dividing U.S. society, social discourse, civics, and increasingly, the rule of law too.

So at least in terms of the most-lit parts of the alt social universe, we now know 6% of the population are heavy users who get news regularly from these sources.

Of course, that's the cume, not he average for each platform. The truth is only a fraction (2% of Americans) get news from Truth Social, Telegram or Rumble, and less so for the rest of the pack. 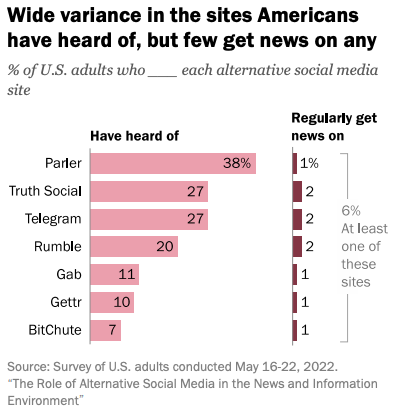