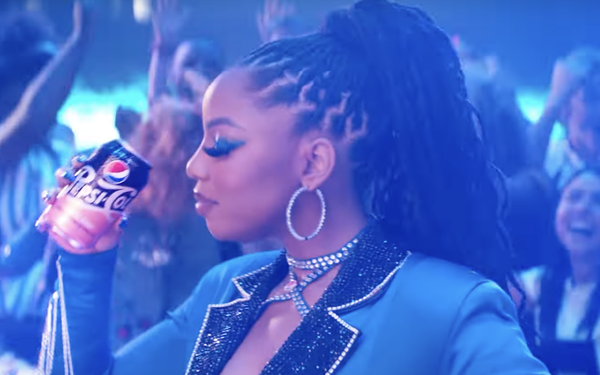 Thirty-eight years after the movie “Footloose” debuted, Pepsi has rolled out an ad with a new version of the song, sung by Chloe Bailey.

The two-minute-plus video, via VaynerMedia, shows Bailey stepping into a soda shop where a sign says “No music. No singing. No dancing” and a jukebox sports a sign saying that it is out of service.

Bailey, who has picked out a Pepsi cream soda by this point, guzzles the drink and an employee at the shop takes the sign off the jukebox. Then, Bailey bursts into song, an update of the 1984 Kenny Loggins hit.

Soon,  everyone in the shop is dancing, except for a tall, skinny guy and a shorter one, who unplugs the electricity. After that, the action switches to a Western dance floor, where Bailey and the group dance again. The two sinister-looking guys do nothing but look uncomfortable, though they eventually join the action.

The spot aims to publicize two new flavors: cream soda and black cherry. To publicize the launch, Pepsi also introduced a spot with Doja Cat reprising “You’re the One That I Want,” from the movie “Grease.”