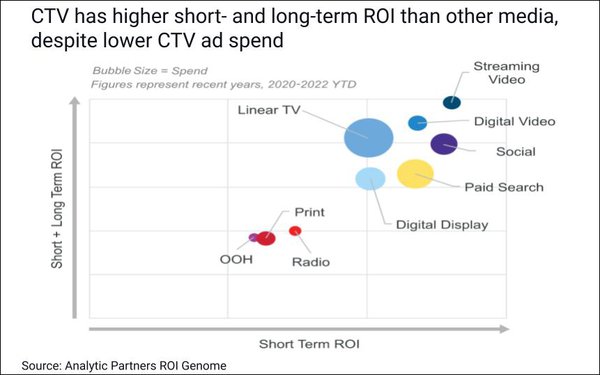 Connected TV (CTV) continues to be “massively underutilized” in relation to its return on investment (ROI).

That’s according to the Analytic Partners (AP) data analytics consulting/tech firm, which reports that CTV is yielding ROI 30% higher than that for other marketing channels — even though CTV is averaging just 7% of total spend.

AP bases those stats on marketing and spending data gathered and analyzed across more than 750 brands in 45 countries through its ROI Genome platform.

AP acknowledges that the perceived difficulty of measurement and attribution is one of the biggest reasons CTV’s spend isn’t a higher proportion of most brands’ media mix.

Digital channels that generate performance measurement via simplistic metrics like click-throughs and “last-click” (the last touchpoint before a consumer makes a purchase) attribution are attractive because they offer “the perception of immediate impact,” and so an ability to justify and adjust spending in real time, notes Mike Menkes, senior vice president overseeing consulting services for AP.

But those metrics don’t take longer-term buying processes into account — which is why CTV’s benefits are so underrated, he says.

When comprehensive measurement programs are applied, they show that streaming TV and other video impact consumer purchasing decisions in both the short and long term, Menkes explains. In fact, video’s impact “lasts twice as long as non-video media,” he says (chart above).

Assessments of CTV and video in general should also take into account their impact on performance and lower-funnel marketing channels, Menkes says.

For example, ROI Genome shows that 30% of paid search clicks are driven by other forms of advertising — most of which come out of video media budgets. Meaning that without video, a large amount of search wouldn’t take place at the same level, and there would be a corresponding decline in purchases.

Bottom line: AP recommends that CTV and streaming video should be at least 10% of a brand’s total advertising spend, and preferably closer to 20%. For some brands, a case for 30% can be made.

Still, while CTV offers improved ROI across the board, like any media channel, it needs to be carefully assessed and implemented on a brand-by-brand basis, Menkes stresses.

For instance, with CTV, higher-ticket and other “high-consideration” brands with longer purchase-decision cycles should experience even better return from CTV spend than lower-consideration brands.

And to avoid alienating consumers by bombarding them, CTV investments should be wide-reaching, rather than concentrated on a single target, genre or streaming service. In addition, frequency should be capped wherever possible.

As with all spending decisions, CTV needs to be considered as part of the overall advertising mix,” Menkes says. “For example, despite CTV’s higher ROI, replacing all linear TV spend with CTV would likely be counterproductive, because it would exclude audiences and geographic areas for which traditional linear TV remains the primary viewing source.”

As always, taking historical measurements and results into account in media planning is key to ensuring that the mix is optimized for each brand, he concludes.