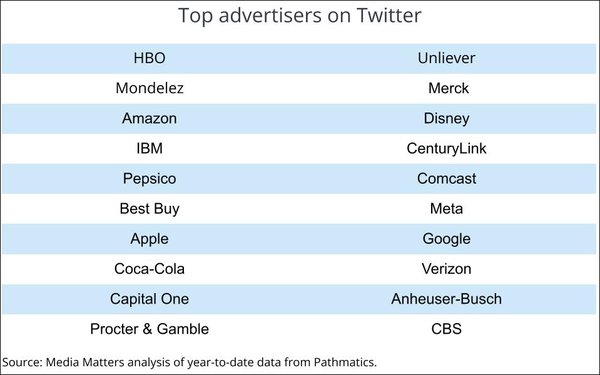 When newly anointed Chief Twit Elon Musk tweeted a letter to advertisers -- and his 110.7 million followers -- Thursday morning, he began it by saying he wanted to reach out to them "personally." We may never know how many he actually DMed, but it most likely included some of the other biggest media brands in the world. According to an analysis of year-to-date ad spending published by watchdog Media Matters Thursday, Twitter's top advertisers include Warner Bros. Discovery's HBO, Amazon, Apple, Disney, Comcast, Google, Verizon and CBS.

The top 20 list, which includes other big brand marketers such as Procter & Gamble,  Unilever, Mondelez, Coca-Cola and PepsiCo, so far has spent a combined $358 million on Twitter this year, or less than 6% of what the social media platform was projected to take in before he acquired it.

The question is, how much does he really care about courting the ad community?

Asked by a follower if his Tesla electric car brand has a marketing department engaged in advertising in a 2019 tweet exchange, Musk famously tweeted back, "I hate advertising."

The second question is, after spending $44 billion to acquire Twitter. According to Twitter's last quarterly earnings release, the company derived 92% of its revenue from advertising. The rest came from "subscription and other" revenue, including data and analytics services.

What's my point? It's that if Musk is serious about what he said in Thursday's letter -- that he wants to make Twitter and even more brand safe place to advertise -- he will have to prove it with action, not words.

And if he does that, he could actually do something Twitter's previous management never really optimized: leveraging its massive reach and influence to scale its ad business on part with the peer companies that ironically also advertise on the platform (see above).

My last question is will you be running it for free? 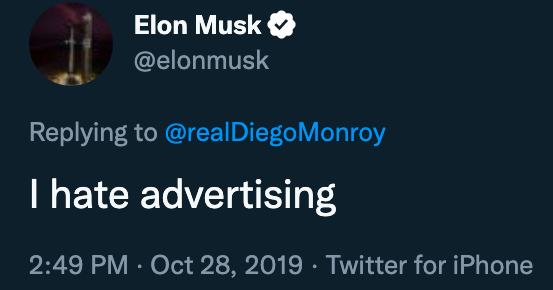 1 comment about "Does Elon Musk Still Hate Advertising?".
Check to receive email when comments are posted.
Next story loading