If 'Teletubbies' Can Be Revived, Can 'Barney' Be Far Behind? 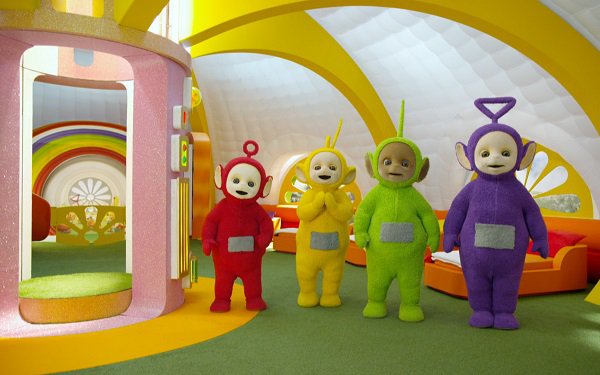 In September, a Netflix press release announced six new shows for preschoolers and the return of another one, “Gabby’s Dollhouse.”

But it is “Teletubbies,” dropping on Monday, that fires the imagination for the simple reason that, of all these titles, “Teletubbies” is the only one that has been a renowned worldwide brand for 25 years.

In its first go-round, the show proved to be a cash cow, generating more than $1.5 billion in merchandise sales by October 2000, according to Wikipedia.

With a formula that has more than proven itself, do not expect big changes in the new “Teletubbies.” The stars of the show are the same four characters of old: (from left to right in the above photo): Po, Laa-Laa, Dipsy and Tinky Winky.

They are a hard-to-peg quartet. In the ’90s, controversy erupted when speculation began to circulate that Tinky Winky was gay. Yes, such things caused controversy back then.

Some critics, such as the Rev. Jerry Falwell, heard the rumors and accused the kiddie show of promoting a gay lifestyle to vulnerable, impressionable preschoolers.

At issue was a bag Tinky Winky toted around that some felt was clearly a woman's handbag, suggesting to the show's critics that Tinky Winky was gay.

In addition, detractors focused on the inverted triangle on Tinky Winky's head, long a symbol of the LGBTQ+ community, plus Tinky Winky's purple color, one of the colors on the “rainbow flag” that is also a symbol in the gay community.

Forced to actually defend the honor of Tinky Winky, the makers of “Teletubbies” basically said, “It's just a kiddie show -- get over it.”

The fact is, the gender of the show's four characters is not specified, much less their sexual orientations.

Besides, none of these concerns would ever have registered with the show's preschool audience in the first place.

The press release from Netflix promised that “each episode [of “Teletubbies”] will include new, original ‘Tummy Tales’ songs that will have the entire family dancing along!”

That may be true of some families, but not others. Like “Barney & Friends,” starring a friendly T-Rex named Barney who also happened to be purple, some parents reportedly grew tired of their small children's devotion to “Teletubbies” and its baby voices and preschool songs, which the kids demanded that their parents play for them over and over again.

As for “Barney,” if a new generation of parents can stand the “Teletubbies” -- even “dancing along” to its “Tummy Tales” -- then a revival of “Barney & Friends” makes just as much sense.