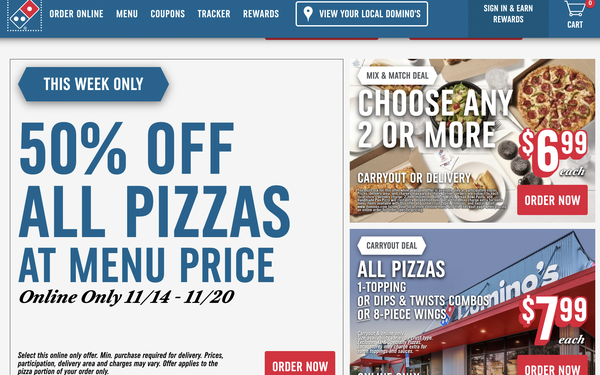 Domino’s doesn’t put turkey on its pizzas. But to celebrate the run-up to Thanksgiving, the chain is offering half off all menu-priced pizzas through Nov. 20.

"November is U.S. National Gratitude Month, and Domino's wants to say thank you to its customers by giving them a great deal on the pizza they love," said Frank Garrido, Domino's executive vice president of U.S. operations and support, in a news release.

As part of the deal, customers can order any size pizza with any crust and toppings. Domino's offers more than 20 toppings, a dozen different veggies and proteins, as well as five types of crust. Domino's features 12 specialty pizzas, ranging from the MeatZZa and Philly Cheese Steak pizzas, to the Pacific Veggie or Spinach and Feta pizzas on a thin crust.

The 50% off deal applies to any menu-priced pizza ordered online through the Domino’s website and apps, or AnyWare ordering platforms such as on Google Home, Alexa, Slack, and Facebook Messenger.

Last year, Domino’s offered 49% off pizzas ordered online for carside deliveries from 4 p.m. to 9 p.m. from Nov. 3 to Nov. 14. The chain previously stated that pizza sales were about 50% stronger on the Wednesday before Thanksgiving than on a typical Wednesday.