The Voice Of Twitter's God 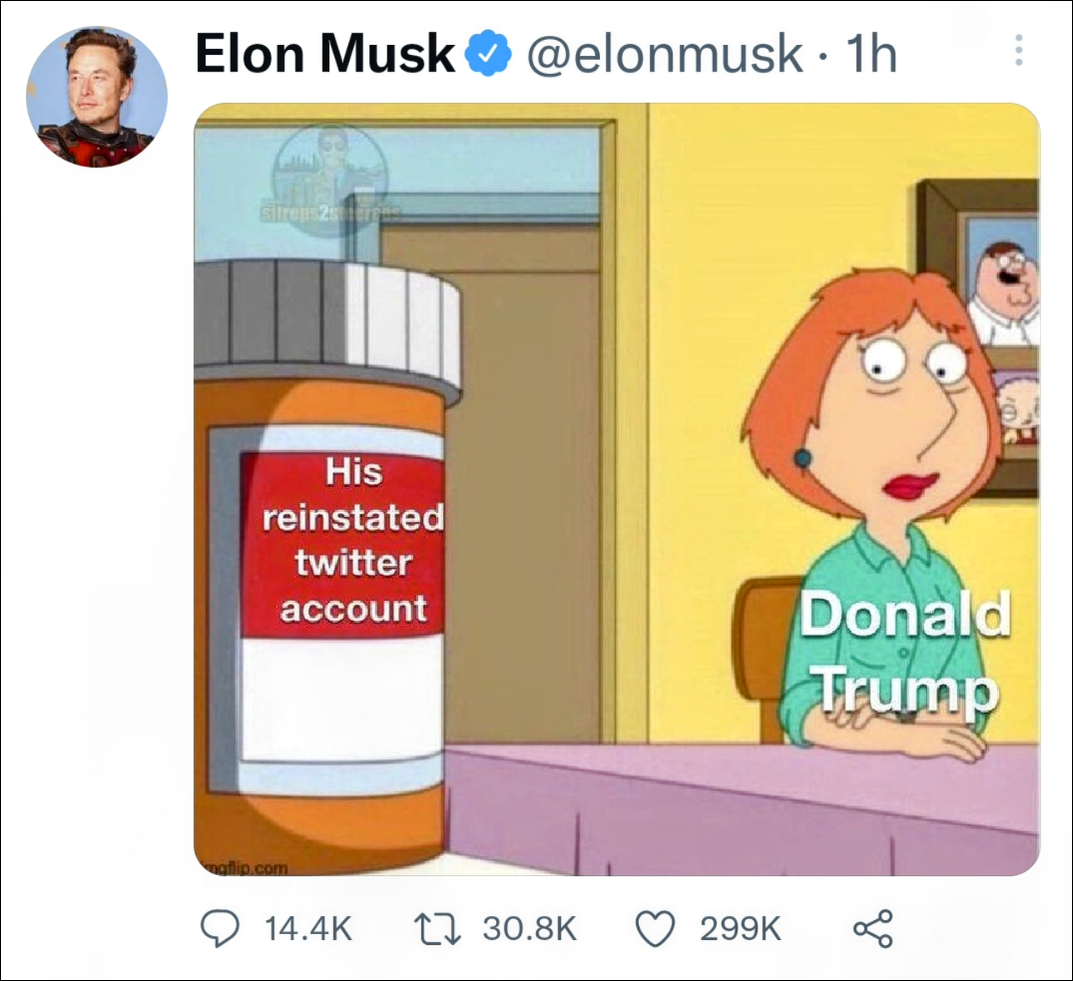 Well, at least Elon Musk appears to be having fun.

Following his reinstatement over the weekend of some of the most questionable accounts banned by Twitter – including @realDonaldTrump, @kaneywest, etc. – Musk celebrated the social media platform’s new “freedom of speech” policy in a series of sophomoric tweets rife with sexual innuendo and even drug use.

In one, which @elonmusk quickly deleted, he posted a mashup of animated “Family Guy” character Lois staring desirously at a prescription drug bottle. The character was labeled “Donald Trump” and the prescription bottle was labeled “His reinstated Twitter account.”

In its place, @elonmusk tweeted a meme showing the image of a pious monk-like character praying to the heavens as he stood next to a young woman, bent over, skirt hiked up, with a Twitter logo covering her private parts. The monk character was labeled “Donald Trump.” 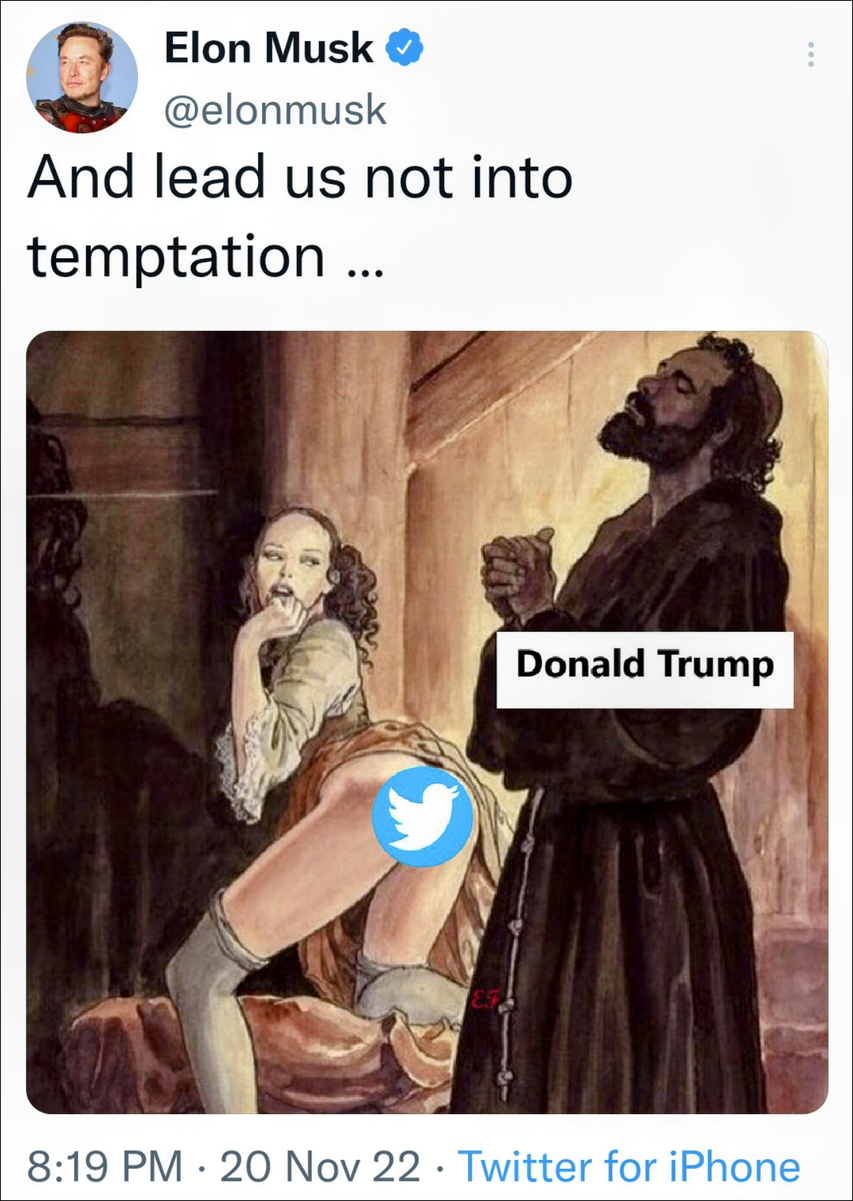 While Musk clearly was egging the still dormant @realDonaldTrump account on, @kanyewest wasted little time reactivating his Twitter presence with a mixed message sure to provoke outrage among people outraged by his previous anti-Semitic hate tweets.

He simply tweeted “Shalom” filed by a text-based smiley face.

And it appears that just about the only previously banned Twitter account that will remain so is Info Wars’ conspiracy promoter Alex Jones’, citing the loss of his own firstborn child and that he has “nor mercy for anyone who would use the deaths of children for gain, politics or fame. Unless you’re Elon Musk, I guess.

One thing that was clear from Musk’s capricious decision-making about reinstating banned accounts – or not – is that he appears to be the one personally making the calls, not any Twitter safety and security team, not a content advisory board, not even common sense.

Before reinstating @realDonaldTrump, @elonmusk conducted a Twitter poll asking followers to vote on it. At presstime, the poll generated more than 15 million votes, with 52% favoring the account’s reinstatement.

“Vox Populi, Vox Dei,” Musk tweeted as he made the decision to reinstate it, using the latin terms for “voice of the people” and “God’s voice.”

Reading that post, I visualized Musk donned in emperor-like attire, gesturing “thumbs up.”

But a more appropriate metaphor might be one of Emperor Nero, fiddling as Rome was burning. 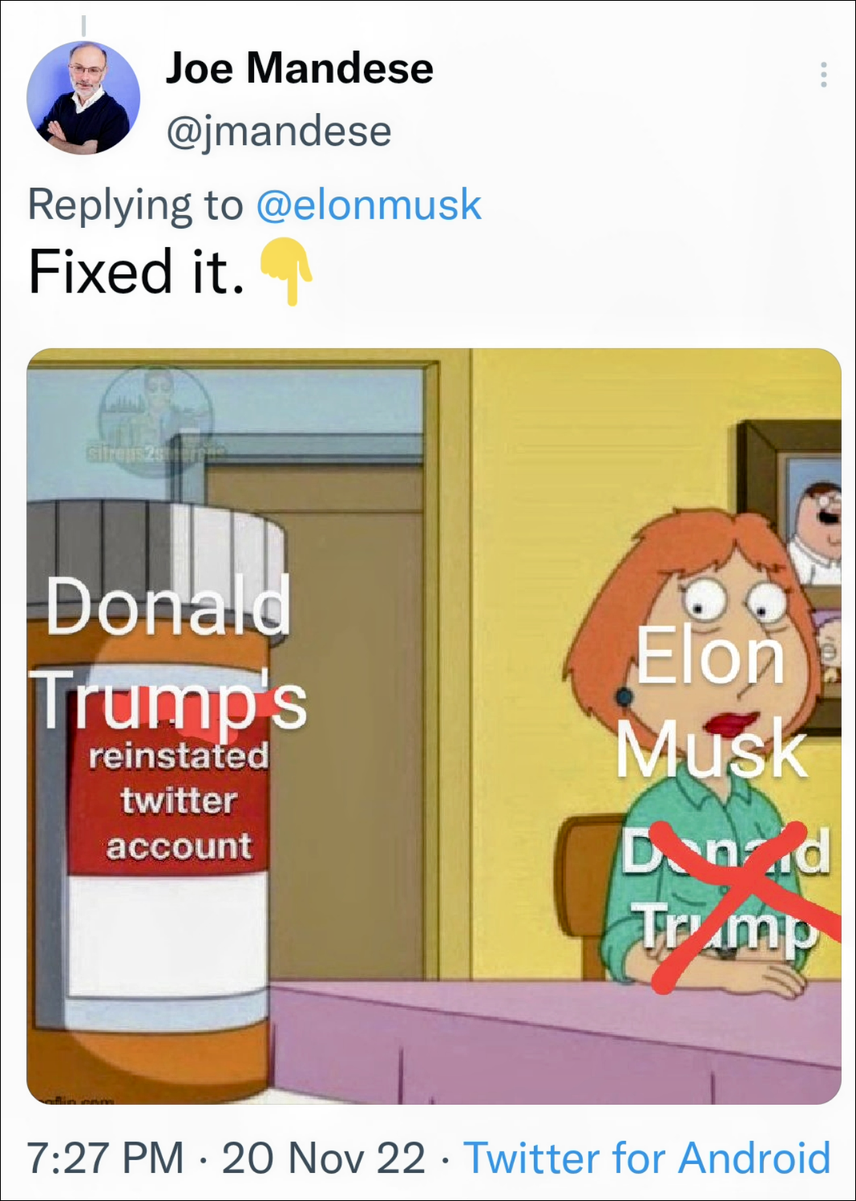 4 comments about "The Voice Of Twitter's God".
Check to receive email when comments are posted.
Read more comments >
Next story loading