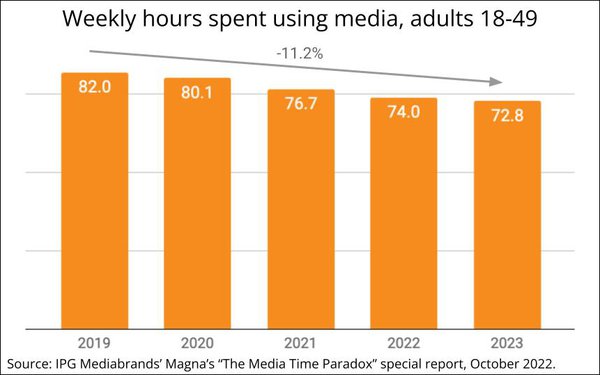 A new report from IPG Mediabrands' Magna unit reads like a sci-fi novel, and to some observers, its key finding -- that the amount of time people spend using media is actually declining -- may seem like it came from an alternative reality.

The finding is part of Magna's ongoing tracking of consumer media, and it may seem counterintuitive to some given the proliferation of new forms of media -- especially digital options like streaming, social media and new and emerging options like gaming, Web3 and some as-yet-to be classified ones.

Most startling of all, the report concludes that even once fast-growing media options like social media are seeing a decline in the amount of time people spend on them. Even TikTok.

"I thought that was pretty interesting," Magna Executive Vice President-Audience Intelligence Brian Hughes says of the erosion in time spent on TikTok, which many regard to be the fastest-growing -- and in some ways -- dominant form of social media.

"They keep getting new users, but the new users are older and older people spend less time on TikTok overall," he explains.

While the report doesn't cite specific data to back up those theses, Hughes says both are logical explanations for the phenomenon, especially coming out of a pandemic in which people were locked down and/or prevented from experiencing much of what they normally might have experienced in the real world, and becoming more dependent on virtual experiences through digital media.

That last finding may be especially consequential for media technology developers betting on the role of metaverses in which people increasingly experience things -- and interact with each other -- via avatars and virtual reality.

The IRL boom may have some real traction to it, Hughes notes, citing rebounding out-of-home, place-based and event-related media, as well the theatrical movie box office.

A recent forecast on experiential marketing spending from PQ Media also projects significant growth for IRL experiences, as well as marketing budgets to support them.

Hughes acknowledged that some of the erosion in measured media usage -- including both digital and analog media experiences -- may be shifting to new and old forms of media that are not so rigorously measured as the ones Magna tracks as the basis of its news report, including the rapid growth of new forms of social media, mobile apps and so-called "long tail" media. 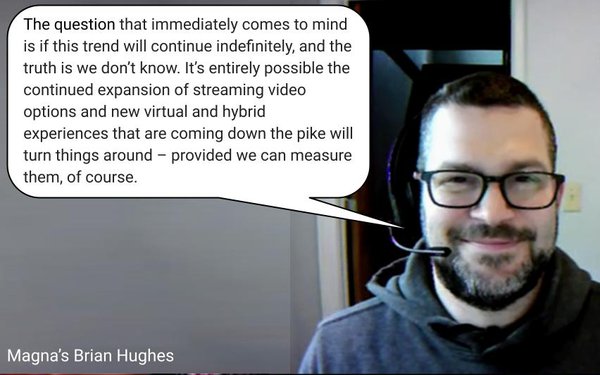