Will Mastodon Become More Than A Twitter Safe Haven? 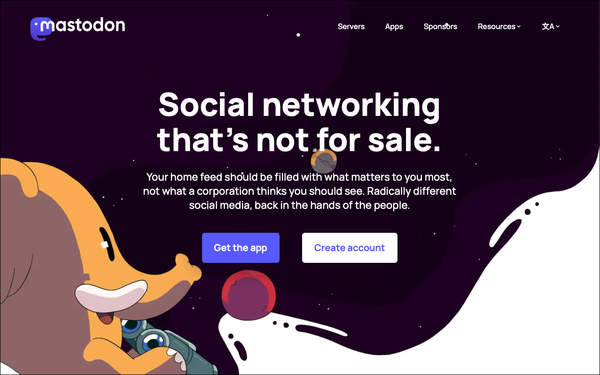 After years of using “tweet” as a verb unrelated to the call of birds, it’s almost impossible to imagine Twitter becoming obsolete.

Yet, with horror-show celebrities like Kanye West and Donald Trump back on the platform, half of Twitter’s employees gone, advertisers pulling their money, the blue checkmark mayhem, and of course Elon Musk acting more like a drunk puppet master than a CEO, “tweet” could soon become extinct.

Searches for the decentralized microblogging platform have skyrocketed 1,308% in the U.S, 2,032% globally, and 4,404% in the U.K. this month, according to an analysis by Cryptobetting.org.

“While Mastodon is still a small fish in a big pond, the rapid increase in searches as people switch off from Musk-era Twitter signifies that there are many users who are looking for a new place to call home,” says a spokesperson from Cryptobetting.org.

Is Mastodon just a safe space for Twitter refugees to recuperate momentarily while the dumpster fire that Twitter has become continues to burn? Or does the budding social platform offer users and brands something Twitter doesn’t?

Founded in 2017 by Eugen Rochko, Mastodon recently amassed over one million monthly active users. When compared to Twitter’s 450 million, that number may seem small, but considering how long Twitter has been around and the quick surge of Mastodon users (489,000 people joined the platform in two weeks), it isn’t nothing.

Unlike Twitter, Mastodon is a decentralized (or “federated”) network. In other words, its servers (or topic-based communities like on Discord or Reddit) are controlled by a multitude of users, not one all-powerful corporation, like every current social media giant. Instead of simply joining the platform as a whole, Mastodon users sign up for a specific server that seems interesting to them, then trust the operators of that server with their data.

Another interesting distinction is that different servers have different content moderation standards. For example, one server may impart a strict anti-harassment policy while another may encourage “free speech” (please note the quotations).

One major setback for Mastodon users thus far, due to its many servers etc., has been approachability. Upon registering, one Buzzfeed writer said she got “stuck in some weird signup hell.”

Some servers reportedly run on various versions of Mastodon and lack certain features like verified accounts and a “retooting” option (oh, yeah, Mastodon calls its version of tweets, “toots,” so there’s also that to contemplate).

But what about brands? After yanking ads from Twitter, will Chipotle, United Airlines, General Mills, Pfizer, Audi, Volkswagen, Ford and General Motors find Mastodon a suitable replacement platform to advertise on?

This early on, it’s hard to say. Part of the problem lies with Mastodon’s thousands of servers, which may present brands with too many niche options to choose from. This could deliver a potentially helpful strategy for brands trying to reach niche audiences.

Reaching a general audience, however, could prove difficult.

While servers can link together and create larger networks on Mastodon, the sheer number of them muddies the waters when it comes to knowing how ads will be bought and served to an audience divided into so many factions.

There’s also the fact that each server plays by its own rules. In choosing to join specific groups, brands may be welcoming unexpected brand safety concerns.

Earlier this month, Richard Edelman, the CEO of public relations firm Edelman, wrote in a blog post about Mastodon that "there are brand safety concerns to consider as there is no central authority to ban spreaders of hate speech given it’s a fragmented network.”

Mastodon is also ad-free right now, meaning brand posts aren’t promoted through paid posts. If users don’t see an ad coming directly from the brand account, they won’t see it at all.

Still, a multitude of journalists and a few major brands like Volkswagen have joined Twitter’s potential successor, hopeful for new ways to discover like-minded communities and reach audiences.