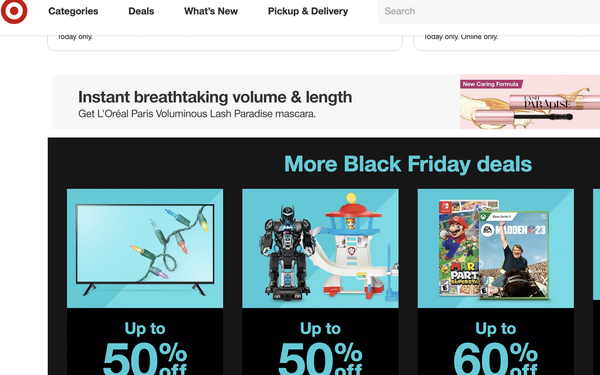 This Black Friday as consumers visit retailers, they may encounter something new: aggressive in-store advertising.

Retail media accounts for 10.7% of global ad spending, according to GroupM, and that figure will grow to 60% by 2027. McKinsey projects that retail media networks could represent as much as $100 billion in ad spending by 2026.

The Boston Consulting Group echoed those findings. Forrester estimates that retail media networks will account for $50 billion in global revenues this year.

Though retail media networks are still relatively new, many retailers have been readying them for a while. Target, for instance, began working as a media agency in 2016 when it targeted shoppers based on advertising purchasing data that it used for a campaign for GlaxoSmithKline’s Flonase.

In 2019, Target rebranded its media business as Roundel. Other retailers with media networks include Kroger, Kohl’s and Amazon.

While such networks are still in a fledgling phase, here are some reasons why they could be effective:

They reach shoppers when they are most open to suggestions. When shopping for gifts, consumers often have a list. A 2018 Field Agent survey of 2,500 shoppers found that 21% of respondents “always” rely on a shopping list and 35% percent replied “usually” did. That leaves about half who haven’t fully thought out their purchases.

They reach shoppers who are looking for deals. This holiday season there will be some deals. Discounts for toys are at a record high, according to Fox Business. A retail network is an ideal way to blast such deals to shoppers.

Personalized offers are discouraged. A retail media network might seem like a perfect medium for personalized offers, but a recent eMarketer report found that only 11% of U.S. shoppers said they wanted such ads.