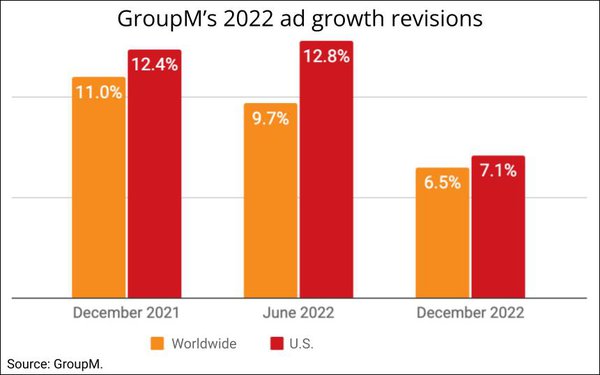 GroupM now estimates the global ad market will expand expand 6.5% this year, nearly half the 11% expansion it originally projected in its year-end forecast a year ago.

GroupM's bullishness extends into 2023, which despite being an off-cycle year with no significant incremental ad spending events such as the Olympics, or U.S. elections, will grow an estimated 5.9%.

While the U.S. continues to be expanding at a faster rate than the global average, GroupM slashed its estimate for 2022 growth to just 7.1% in 2022 from 12.8% at its mid-year update in June.

GroupM now projects the U.S. ad economy will expand 5.5% in 2023, lagging the global rate of expansion next year.

During a preview of GroupM’s forecast with members of the press, Global Director of Business Intelligence Kate Scott-Dawkins characterized the downward revisions as more of a “deceleration” from the “outsized” growth rates in 2021, which compared with 2020’s COVID-19 lockdowns and a mini ad recession.

Scott-Dawkins also described the near and long-term forecast to be more of a “normalization” of the ad economy’s expansion, projecting “mid- to single-digit growth heading into the next five years.”

“I think that’s a real theme as we go into the end of the year, which is that normalization,” she said. 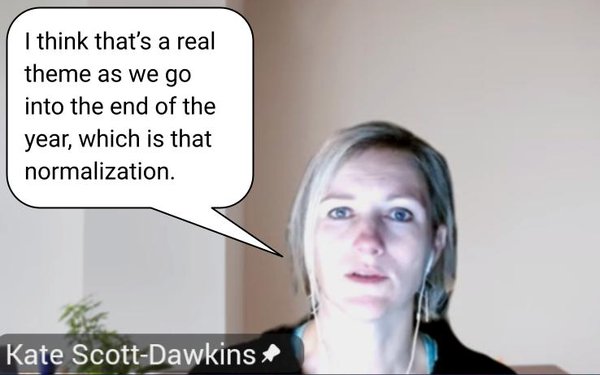