ANA Word Of The Year: Inclusion 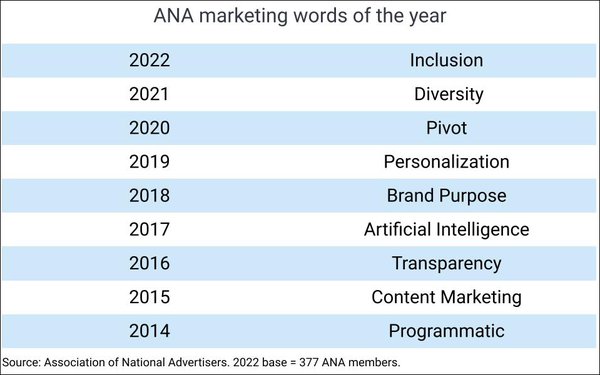 A year after naming "diversity" its annual word of the year, the members of the Association of National Advertisers (ANA) have included another component of so-called DEI -- "inclusion" -- as their 2022 word of the year.

"The pairing of the words 'diversity' and 'inclusion' is a strategic priority area for the ANA CMO Growth Council, which was established by the ANA and Cannes Lions to drive enterprise growth," the ANA stated in this year's announcement, adding that diversity, equity and inclusion are key areas of focus for its growth agenda.

"So, what’s the difference between diversity and inclusion?" the ANA asked rhetorically, offering these two definitions:

Runner-up choices in the ANA 2022 Marketing Word of the Year voting were hybrid and metaverse. Inclusion, however, was the top vote-getter by a good margin.