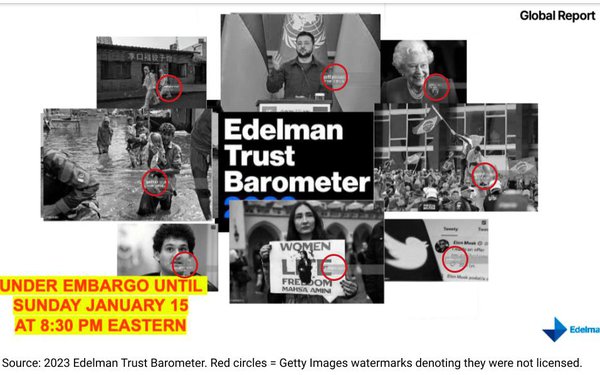 The first thing I noticed when I received an advance copy last week of the 2023 Edelman Trust Barometer was that none of the photographic images used in the report were licensed for publication. I mean, how can you trust a P.R. firm that doesn't even pay for the intellectual properties it uses to illustrate its intellectual property?

Now it could be that Edelman just had not officially licensed the images for the advance copies it sent to the press last week, but you'd think the team would have had a little more attention to detail about that, given the study's subject matter -- trust -- and the fact that it was going to be released Sunday at the World Economic Forum in Davos, Switzerland.

But I may well have been pre-sensitized for an extra amount of scrutiny coming into this year's report, the 23rd annual one published by the giant independent PR firm, which has made a franchise out of it. That's because some sources I respect and trust began raising questions about the methodology Edelman uses to produce the study, the way it aggressively promotes it as a standard bearer of advertising and marketing industry -- as well as overall corporate -- trust.

Frankly, that surprised me, because I've covered the report for much of the past couple of decades the way I've covered numerous similar studies and reports claiming to measure consumer trust about this entity or that one: With a grain of salt, mainly because there are so many of them purporting to be definitive measures of trust that I wasn't actually sure which one to trust.

So when my sources said they were looking into Edelman's methods, I scoffed and said things like, "I think you're giving them too much cred as an industry standard measure," or something to that effect. Until one pointed out that they are actually showing up in business credentials presentations, and quite possibly, influencing business decisions.

Still, I've always adopted a buyer beware approach to reporting on reports, and felt that our readers are among the most sophisticated ones in the world when it comes to reading between lines, vetting reports of industry studies, etc.

I don't know if I'm wrong about that, but just as Edelman was releasing this year's report in Davos, The Guardian newspaper broke a story headlined: "The world’s biggest PR firm claims to be an expert on trust – but is it?"

The annual study "purports to measure whether people around the world trust businesses, governments, NGOs and the media," The Guardian writer Adam Lowenstein writes, adding, "There’s just one problem: even as Edelman promotes its brand and pursues clients with stern warnings about the importance of trust, critics charge the company appears reluctant to follow its own advice. The firm’s clients have ranged from ExxonMobil to the Saudi government and members of the Sackler family, the former owners of the opioid manufacturer Purdue Pharma."

It's a pretty scathing takedown, but it's difficult for me to weigh in directly on the allegations, because when I requested an interview with Edelman, I was told that they'd get back to me, but they never did.

So all I'm left with is The Guardian article I just shared the link with you of, the allegations I hoped to ask Edelman about on the record. And the findings of this year's study, as well as its recap of the past 23 years' (see below).

One of the things you will notice over the history of the study is that its findings have consistently moved in the direction of trust for the kinds of corporations and businesses Edelman and other big corporate PR firms tend to represent vs. governments, NGOs and, not surprisingly, the news media.

And the same thing seems to be true for this year's study, whose top line finding is about "navigating a polarized world."

The main findings are that people in most (24 of 28 developed countries surveyed) have reached all-time lows in terms of their perceptions of being "better off" than they were five years earlier.

Anxieties are peaking for both economic, as well as existential threats, including climate change, nuclear war, food and energy shortages.

And that businesses remain the "most trusted" institution, with both NGOs and the media slipping another notch in Edelman's rankings.

That's all I've got for now, but hopefully, Edelman will get back to me so we can get some of this on the record, because why would you believe me? I'm just a journalist and according to Edelman's findings, we're not very trustworthy at all. 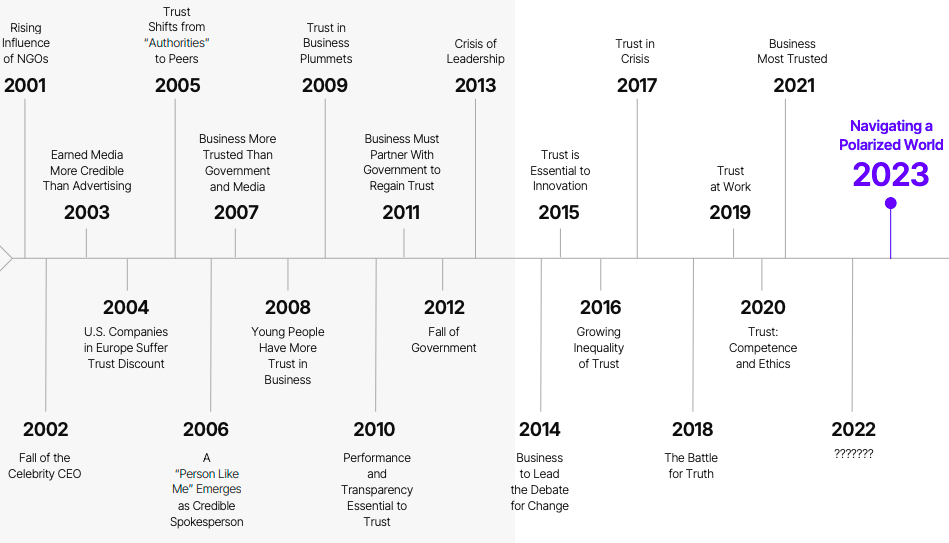